From the moment you walk into Teatro de la Luna’s dedicated space at the Gunston Arts Center you are transported to Latin America. From the costumes on the walls, to the music, to the homemade empanadas at the concession stand, the warmth of the Hispanic community is everywhere. 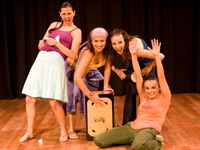 This was an evening of firsts for me: my first time to Teatro, my first show entirely in Spanish, and my first live simultaneous English translation, via a headset. I enjoyed it, though the ‘voice in my head’ translation took some time to get used to.  Once I felt comfortable, I started to wish I could always have someone commenting on my daily decisions. “Ally, that hair color is a bad choice.” “Ally, do you really need that piece of cake?” On second thought, I’ll stick to Siri.

The theater company’s 14th Annual Festival Internacional de Teatro Hispano (International Festival of Hispanic Theater) is a six-week celebration of Hispanic theater and features companies from all over the world. Plays from Ecuador, Argentina, Puerto Rico, Venezuela and the U.S. compose the other shows in the festival.

I had the pleasure of seeing Latinas from Teatro Ruiz in Costa Rica written by Denise Duncan. This show, featuring four young women, touched on the trials and tribulations of being an immigrant in a foreign country.

Performed on a bare stage with minimal props and lighting, the four women (María José Callejas, Catalina Calvo, Raquel Salazar and Katherine Peytrequín – who is also the director) had an easy rapport with each other.  This was explained further when at a post-performance discussion – the actors explained that they had been performing this show for a year and a half all over the world.

Woven together with music, chanting and a cacophony of sound, each actor touches on a specific aspect of being an immigrant from staying in a country because they fell in love, to the pain of not being able to go home because the money they earn helps their family survive. The show also features several other themes of immigration: the daunting paperwork, looking and sounding different, finding and keeping a job, meeting people, visas and green cards, and the ever present feeling of being alone among a crowd.

I appreciated the abstract nature of the show but felt the script did some disservice by not tying the stories together.  How did the four women know each other? Were their stories unique or intertwined? Additional explanation from the playwright would have made a good script great. The women remain unnamed for the duration of the show and while this was a little confusing to this reviewer. I think this choice by the playwright was clever – as you are forced to be invested in the story that is being told and not necessarily the character.

Katherine Peytrequín stages the show cleverly by designating a square of the stage for each actress and bringing them together in the center for transitions. She also uses the overlapping dialogue as a way to show the confusion of being an immigrant. In a bit of irony, Peytrequín was a substitute for the original actor who was denied a visa to come to the U.S to perform.

I really enjoyed my time visiting Costa Rica. If you are looking for unique theater with a global view that makes you think, laugh and see the world differently, Latinas and the International Festival of Hispanic Theater is for you. I look forward to recommending the show, the festival and Teatro de la Luna to everyone I know.

Here is information on the International Festival of Hispanic Theater.