Linda Eder came and conquered her adoring and appreciative fans as she returned to Strathmore with a program that featured 18 songs and one encore – rich with vocal theatrics as well as lovely, soft ballads, some Broadway show-stoppers, and some cool, jazzy songs from her new CD Now. 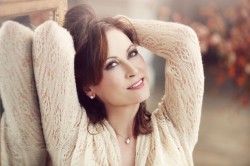 Beginning the concert with “The Bells of St. Paul,” from her Christmas CD Christmas Stays the Same, Linda Eder showed her adoring fans that he glorious voice was still in fine form and she hit all the high notes with ease. What followed were lovely interpretations of Michel Legrand’s “I Will Wait for You,” – where she held a note for what seemed to be an eternity – Irving Berlin’s “Blue Skies” and “On the Street Where You Live” from My Fair Lady, sung, “as they did in the original production.”

The audience waited anxiously to hear her belt the heck out of her show-stopping song from Jekyll and Hyde – “Someone Like You” – and she didn’t disappoint them with one note becoming more powerful than the next. “They call me a Broadway star, but I only appeared in one Broadway show. I did appear in some Off-Off-Broadway shows – way off in other states!” Linda also provided a powerful interpretation of “Anthem” from the Broadway musical Chess.

The performance included renditions of songs from her new CD Now: “The Heat of the Night,” “No Finer Man,” the title song “Now,” “More Than Heaven,” “What’s Never Been Done Before,” and “A Woman in His Arms” – from a musical her ex-husband Composer Frank Wildhorn wrote for her called Camille Claudel, based on the life of the French sculptor of the same name who had a fiery relationship with the great French sculptor Auguste Rodin (The Thinker).

But it was her fiery and jazzy rendition of “Mad Hatter” that brought the house down (although her diction was pretty muddled). The song was from the recent short-lived Broadway musical Wonderland which had a hare-raisingly short run earlier this year.

For me, despite listening to that glorious voice, the highlight of the night was listening to the incredible musicians who backed her up: Musical Director Billy Jay Stein – an amazing keyboardist who at times was playing the Steinway and his Keyboard Electro 2 at the same time.  Allison Cornel – who played viola and keyboards – sang gorgeous vocals with Linda on “Falling Slowly” from the movie Once. Also in the band were Jerry Marotta on drums, Peter Calo on guitar and keyboard, who also provided vocals, and David Fink on bass.

The night began with “I’m Linda Eder, and I’m a singer.” And what a gifted singer she is! 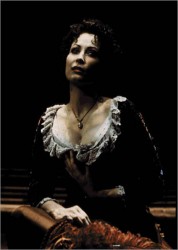 Linda Eder as Lucy Harris in the Broadway musical ‘Jekyll and Hyde.’ Photo by Carol Rosegg.

Watch Linda Eder sing “Someone Like Me” from Jekyll and Hyde.

Watch Linda Eder sing “Man of La Mancha,” which she sang as her encore tonight.

My interview with Linda Eder.