Composer Matt Conner adds another accomplishment to his impressive resume – as director of his musical Nevermore, which sets several of Edgar Allan Poe’s works to music. The show had local productions at Signature Theatre in 2006 and Kensington Arts Theatre in 2008, and now it’s being staged and directed by Conner in the cozy and intimate confines of Creative Cauldron at ArtSpace Falls Church, where he receives hauntingly beautiful performances from his extremely talented cast. 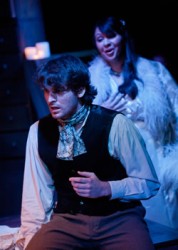 The book by Grace Barnes makes Poe the central character and surrounds him with five women who were the inspiration for the characters in his work. Barnes weaves it all together and shows how Poe’s mental illness and compulsions and addictions leads to his early demise.

Scenic Designer Marie Jervis makes use of the small space by providing stacks of drawers and a large table that is utilized as a bed and Poe’s desk where he writes his works. Lots of paper  – pages from Poe’s works – is strewn all over the stage and are ‘collected’ slowly as the performance progresses.

Sean Thompson’s Poe is sung in a beautiful tenor, and his powerful and emotional portrait of the manic poet is at times frightening. His rendition of ‘Dreams” at the end of the show is heartbreaking and is a tour de force. Priscilla Cuellar is a standout as Poe’s Mother, and her gorgeously sung duet “To My Mother” sung with Thompson – produces heavenly harmonies.

Katie Culligan plays Poe’s young bride (and first cousin) with innocence as she begs Poe to read her his stories. She provides touching renditions of “Bridal Ballad” and the very melodic “Annabel Lee.” Mary Payne Omohondro’s brings strength and compassion to her performance as Muddy – Virginia’s mother. Karissa Swanigan-Upchurch is charming and elegant as Elmira, one of Poe’s early admirers who became engaged to Poe. As a widow who has always loved Poe and wishes for their eventual reunion, she delivers a loving rendition of “Silence.” Dani Stoller plays the over-the-top ‘The Whore’ with passion. 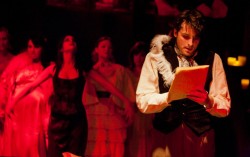 The cast of Nevermore. Photo by Laura Connors Hull.

For those of you who recently saw The Hollow at Signature and enjoyed the productions of Nevermore at Signature Theatre and Kensington Arts Theatre, I urge you to make the trip to Falls Church to see this beautifully directed and sung production of Nevermore.