NINE at The Arlington Players

Even with a last minute change of venue (due to last month’s ground-moving earthquake), The Arlington Players open their season with a delightful production of Nine, the acclaimed Tony Award-winning 1982 Best Musical featuring music and lyrics by the esteemed Maury Yeston. Unfortunately, this excellent production is hampered by sound problems in an otherwise very attractive venue. 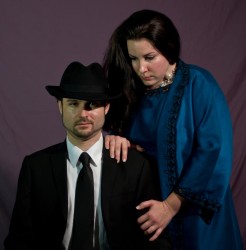 Nine is a musical version of famed Italian film director, Frederico Fellini’s semi- autobiographical classic film 8 ½. The musical (similar to the film) tells the story of Guido Contini, a well known film director and philanderer. After a few recent flops, Guido, now approaching 40 years, faces a bad case of creative block and seeks inspiration for his latest film in the face of relentless pressure from his longtime producer. He ultimately finds both distraction and inspiration at a Venetian spa from the many women in his life, each of which play a role in the musical, including his wife Luisa, mistress Carla, his mother, his lead actress Claudia, his producer Liliane La Fleur. The musical (like the film) interweaves Guido’s current creative struggle with flashbacks from his childhood as well as his dreams and fantasies.

The book to the show (by Arthur Kopit) does not contain much in the way of narrative, which may make it challenging for viewers unfamiliar with the show (or the film), but the score is enchanting, and there are many delights in this production directed with flair by Lisa Anne Bailey.

The actors all speak and sing with believable accents, which gives the production a real sense of authenticity. Amanda Ackerset is sparse but effective, and Kevin Lane’s cinematic costumes are spectacular.

I have always considered Nine to have one of the most beautiful scores of any contemporary Broadway musical, and it is sung beautifully by the Arlington Players’ fine ensemble.

Eric Kennedy leads the group as a terrific Guido, exuding the character’s childlike charm and uncontrollable libido while sharing strong chemistry with the many women in the cast. His young counterpart played by Colin Cech is also a treasure and, in addition to playing the 9-year old Guido, is amusedly used for other bit parts in the show.

The Arlington Players has brought together such a lovely group of women to surround Guido that is hard not to single them all out. I will note that Evelyn Trester is quite moving as the betrayed yet strong Luisa, Lauren Palmer Kiesling plays a very sexy Carla and Anne Marie Pinto is lovely as Claudia with her gorgeous rendition of “Unusual Way” – one of the highlights in this production. Lorraine Magee delivers a rousing “Folies Bergere,” while Kristen Magee has great fun with the showstopper, “Be Italian.” Barbara Porter brings elegance to the role of Guido’s mother.

To get to hear this beautiful collection of songs sung so well is really a treat.

Furthermore, the Arlington Players production features a top-notch orchestra (under the excellent musical direction of Paul Nasto), which makes me even more dismayed to report that you often can hardly hear them. This sound issue is at least in part due to a last minute change in venue from the Arlington Player’s usual performance space – Thomas Jefferson Middle School, whose stage was damaged in our recent earthquake – to a new space, The Performing Arts Center at Kenmore.

Eric Kennedy (Guido) surrounded by his 'women.' Photo courtesy of The Arlington Players.

Placed behind the action and to the side of the set, the orchestra sounds muffled much of the time, which is a shame because when you do hear them play, they sound amazing. Even the dialogue can be difficult to hear at times, possibly due to noise from the air system in the facility. Losing the crispness of the sound and in particular, of a finely-tuned live orchestra takes this fine production of Nine down a a notches to a solid eight.

TAP’s production of Nine is well worth seeing! Don’t miss it!

Running time:  2 hours and 20 minutes, plus one intermission.

Nine plays through October 21st at The Arlington Players at The Performing Arts Center  at Kenmore – 200 South Carlin Springs Road, in Arlington, VA. For tickets, call the box office at (703) 549-1063, or purchase them online.