Once on This Island at Red Branch Theatre Company

If you’re ready to be washed away in the mystical magic of a Disney-esque fairytale with vibrant music, powerful singing, and delectable dancing, then drift through the storm down to The Red Branch Theatre Company’s production of Lyricist Lynn Ahrens and Composer Stephen Flaherty’s (Ragtime) Once On This Island. A tale of whimsy and love – an orphan girl of the peasants on the island falls in love with a man from the rich side of the island. Mix in the gods of earth, water, love, and death, as well as strong Caribbean music and upbeat dance numbers – and you’re in for one enchanting evening. 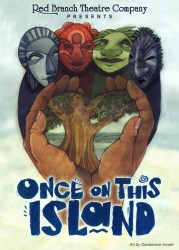 With nautical netting framing the stage, a tree growing up from the apron arching out into the audience, and brown boards across the stage floor to create the illusion of sand you truly feel swept away to an exotic island, whisked easily from the modern day playhouse into a tropical paradise of merriment.

Set Designers Corey Brown and Erika Hagen create a beautiful landscape for the play using large island style rocks with the faces of the Gods painted upon them to set the scene. Brown and Hagen have designed a tree with a trunk and branches so real that you would believe it was growing through the floor of the theatre and straight up to the ceiling. It’s a powerful image as so much of the story surrounds the tree itself, from the beginning where little Ti Moune (played by Mycah Brown) is stranded by the storm, to the finale where grown-up Ti Moune (played by Anastasia Stewart) ties down her roots. The set evokes strong feelings of exotic far off places found only in fairytales and adds to the magic of the production.

And what fairytale would be complete without dancing? Unique island dances are presented throughout the production brought to you from the hard working minds of the choreographic team, lead by dance captain Mark Allen. With fellow teammates Dawn Bames, Jason Kimmell, and Jenny Male, the team presents an array of movements well matched to the island beat. The waving bodies of the actors move as one while performing these dances; swaying to and fro, swinging their arms wildly in rhythm, and never falling out of synch with one another.

Watching the actors create ‘rain’ through their dance is incredible. As the god of water, Agwe (Cory Jones) calls forth the rain the chorus dances wildly through the house and down onto the stage, flailing their arms about, with bright blue and white streamers dangling from their wrists. They wave their arms high and low, circling Agwe to create a true storm. The effect is spectacular. And the island feel is not lost in the wardrobe department. Costumer Zakiya Kambui outfits the ensemble in flowing skirts of vivid colors and patterns along with wild solid colors for the gods. The combination of costume and dance is aesthetically pleasing and enhances the experience tremendously.

The ensemble is powerful, filling the playhouse with their soulful voices as they tell the tale of the orphaned island girl. There is a captivating moment where they almost seem possessed as they jerk back and forth, thrusting their arms toward the audience during the musical number “Pray.”

Ti Moune (Anastasia Stewart) has a beautiful voice – but unfortunately is often drowned out by the orchestra and the chorus. Stewart’s eyes are expressive as she sings softly of joy and sorrow, living each emotion through the windows of her character’s soul. She moves carefully around the stage and all of her expressions are concentrated in her face. Her rendition of “Waiting for Life” is gorgeously sung.

The Gods as a whole are also difficult to hear, but love and death stand out when belting their solos. Erzulie, love, (played by Samantha McEwen) owns her solo number when she sings for the love lost of Ti Moune. While not physically expressive – her voice swells and fills the theatre so powerfully it is moving. But the true show stealer is Mark Allen, taking up the roll of Papa Ge – death. Allen’s eyes come alive as does the rest of his body when he confronts Ti Moune while trying to claim the life of her love. He explodes with vocal prowess, creating a true villain of his character as he creeps and jumps across the stage. As Allen finishes his solo with maniacal cackling you’re left with a haunting feeling, the mark of darkness; an absolutely evil delight to watch. 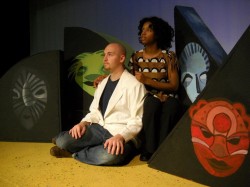 Magic moments throughout the production truly bring the enchanted fairytale to life. When the ensemble spins little Ti Moune (Mycah Brown) offstage in a roll of white netting, and then she is spun back onstage as grown-up Ti Moune (Anastasia Stewart) you feel a jovial reminder of Simba growing up across the log in the jungle during Hakuna Matata. And her scenes with Eric Hufford (Daniel) and powerful and  at times sweet, and his rendition of  “Some Girls” wa sweet and passionate. and his duet with Anastasia Stewart – “Forever Yours’ was beautiful and heartfelt.

The performance given by Wil Lewis III, as Tonton the father figure, is reminiscent of Mufasa; a proud father willing to shoulder the burden to clear the way for his child. But perhaps the most enchanting moment of all is when the ensemble bends so easily to become nature itself. With melodious sound effects and effortless physicality they become twittering birds, rustling trees, hopping frogs and whispering winds. It’s truly delightful to watch human beings transform into scenery and back again as if by magic.

Enjoy the bubbly nature of this enchanting and inviting, and alluring magical tale. Once On This Island is a musical fairy tale not easily forgotten.

Watch video highlights of Red Branch Theatre Company’s Once on This Island.