The inmates are definitely running the asylum at the Prince William Little Theatre’s production of One Flew Over The Cuckoo’s Nest. Directed by Darrell Poe, the production presents a unique glimpse of life inside the insanity ward of a hospital set in a time where electric shock therapy and frontal lobotomies are still common practice in curing the mentally disadvantaged. The story focuses on the new admittance of a patient, McMurphy (Colby Mills) and the way the ward is run by the head nurse, Nurse Ratched (Alexia Poe). Laid out with ‘tennis court’ style seating – Poe intends for the audience to witness the events unfold from the view point of the fly-on-the-wall. Most of the production is played with the actors facing one particular side of the seating: the side where the fewest people were sat. Poe’s projection of fear, camaraderie, and rebellion are brilliantly displayed in the outstanding performances of the inmates. 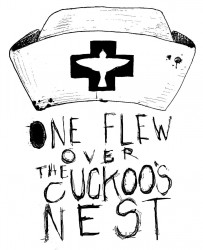 The set, designed by Poe with assistance from Jarrett Baker and Dave Warner, creates an eerie sense of sterility and confinement. It’s completely white; the floors, the seats, the wall structure of the enclosed nurse’s station, even the television set is white. And the sense of an asylum is only enhanced when you look at the costumes, designed by Leslie Ross, as they are fitted to the nurses and orderlies in the show. Simplistic all white scrubs for the males, and white dresses, nurse hats, even white sneakers for the nurses; all culminating to present a desolate ward where these poor trapped souls must remain.

It is a little disheartening to see Nurse Ratched (Alexia Poe) presented as such a lifeless character. Poe’s performance is flat, never presenting the sickly sweetness or thinly veiled manipulative evil that the director promises. Her emotions never change, even when she’s supposed to be yelling at the orderlies, and it often sounds like she’s reading lines rather than speaking to her charges on the ward. But your spirits are quickly uplifted when you get to meet all the crazy characters that populate the ward.

Randle P. McMurphy (played by Colby Mills) is the newcomer to the ward and remains fairly static with his quips and movements throughout the show. Mills does however present a maniacal laugh eerily similar to Jack Nicholson, enough to make you wonder if his character might actually be crazy. Mills comes to life, however, in the second act, showing his violence and companionship with grace and ease.

But be scared, or maybe laugh at the insanity of Dale Harding (Darren Marquardt). He isn’t really mentally ill, in fact he’s voluntarily placed himself on the ward, but Marquardt’s performance is nothing less than crazy. Wandering around the stage in a frantic almost paranoid manner, Marquardt presents himself in an over-the-top manner befitting to his closeted homosexual character. He gesticulates with energy, swinging his hands wildly as he talks, but when it is time for his character to get serious, he breaks down into believable hysterics, no less dramatic than his normal paranoid character.

And you’ll find yourself almost believing the hallucinations of Martini (Ian Wade) as he experiences them. Wade gazes glassily off in many directions as he interacts with people who aren’t there. He delivers a stellar performance in act II when he believes he’s in a fighter plane shooting at enemy planes as he runs onstage arms extended, making loud plane noises, and then grabs his invisible gun and starts shooting every which way but loose. Similar excitement can be found in the explosions of Scanlon (Tony Turchiano). The character is mostly quiet, but when he jumps up to speak, often of building bombs, Turchiano explodes with emotion and energy. He runs screaming like a madman all across the stage with a booming voice and high-pitched squeal, enough to make you wonder if he really does have a bomb tucked away somewhere under the seats. But the eye-catching inmate isn’t the bombastic Scanlon, or the hallucinating Martini, it’s the quiet stuttering Billy (Mike Rudden). As a suicidal patient, Rudden presents a captivating yet haunting portrayal of a young virgin boy with a stutter. He never misses a beat and his stuttering speech is believable. Rudden plays timid and lively growing out of one and into the other as his character experiences new things to create these changes.

The man you just can’t take your eyes off of, however, is Chief Bromden (Rodrigo Pool) often just referred to as ‘The Chief.’ Bromden’s character is a deaf and dumb mute with a head-shaking, eye-twitching tick to which he is fully committed. There is never a moment throughout the duration of the show where you see an actor playing a man with a tick, but rather this tragic man who cannot help his physicality. During scene changes, Pool’s character is somehow able to speak, and the tales he whispers are harrowing and disquieting. He shifts into something completely different and commands the attention of the audience simply by speaking in hushed tones with clear annunciation. When Pool’s character comes into possession of speech later in the show, he delivers it with power, and his final scene is frightening, delivered with physical strength and terrifying emotions playing across his face.

So don’t be afraid, well maybe a little, and watch the inmates run the show in this One Flew Over The Cuckoo’s Nest.

One Flew Over The Cuckoo’s Nest runs through October 30, 2011, at Prince William Little Theatre at the Hylton Performing Arts Center – 10960 George Mason Circle, in Manassas, VA. For tickets, call 703-33-7796, or purchase them online.