Othello at Folger Theatre is a visually stunning piece of theater. Reset during the Crusades in exotic Cyprus, the production places emphasis on the religious elements of the text to great effect. It is rare to find a production where the sets, costumes, and lighting elements come together to so perfectly support and enhance the rest of the show. The ever-changing set (by Tony Cisek) uses deceptively simple elements to become the grand halls, intimate rooms, exotic meeting places, and tempest tossed sailing vessels that the play requires, and the beautiful lighting by Andrew F. Griffin masters both the simplistic (such as  the perfect transition from dark night to bright dawn) to the incredibly complex (complete with moody colors and abstract patterns). Director Robert Richmond uses the set and the unique stage set up at the Folger to great effect- actors move in an out of alcoves and balconies and through the center aisle of the audience. Iago’s ( Ian Merrill Peakes) moments alone with the audience are especially well staged and enhance an already spectacular performance. 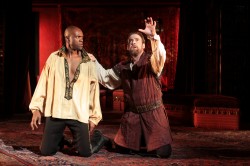 Owiso Odera as Othello and Ian Merrill Peakes as Iago in Shakespeare’s Othello, on stage at Folger Theatre through December 4, 2011. Photo by Carol Pratt/Folger Theatr

Ian Merrill Peakes as Iago is the absolute star of this production. He plays Iago not (as most actors do) as the cunning, pure evil villain, but rather Merrill Peakes’s Iago is slightly unhinged, and often lost in his own game of manipulation. The moments in which Iago lets the audience see through his game are compelling and disturbing. Iago’s wife Emilia (Karen Peakes) is a perfect foil for him-Peakes is brazen and funny until the final act, where her realization of her husbands deceit is heartbreaking. 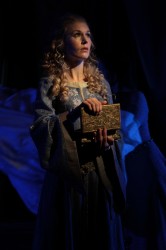 Janie Brookshire as Desdemona in Shakespeare’s Othello, on stage at Folger Theatre through December 4, 2011. Photo by: Carol Pratt/Folger Theatre.

The production has an interestingly comic take on the character of Roderigo; Louis Butelli is wonderful, and his Roderigo is funny, pathetic, completely drawn in by Iago’s plot. However, the director’s choice to make Roderigo such a funny character (although hilarious in the first half of the show) does not work as well in the last two acts. After the comic relief the audience grew to expect from acts I, II, and III, and they were laughing at inappropriate moments in acts IV and V.

Ian Merrill Peakes’s Iago is brilliant and his performance is worth the trip to Folger Theatre to see Othello, and the design elements are some of the best I have seen in quiet some time.

Watch a video preview of Othello.

Jessica Pearson is an area director, writer and teacher. She is currently a member of the faculty at the Compass Rose Studio Theater and is working on a Master's Degree in Theater History and Criticism at The Catholic University of America. In the past she has worked for The HoboJungle Theater Company, The Washington National Opera, NuSass Productions, Longacre Lea, Washington Shakespeare Company, and The Sheridan School.