Othello is wicked cool! Expect the unexpected when Synetic Theater takes on The Bard. For as many dramatic elements – jealousy, perfidy, lust and murder – as Shakespeare has drawn upon for this play, Synetic proposes a paradigm shift with powerful physicality and radically conceptualized artistry. That it is done without the eloquence of Shakespeare’s words does not for one instant compromise its dramatic appeal. It in fact strips bare the Elizabethan dialogue and British accents to reveal the intensity and intricacy of the human condition as poetically as ever. In continuing their fall Silent Shakespeare Festival, Synetic Theater Director Paata Tsikurishvili and his wife, Choreographer and actress Irina Tsikurishvili, take on the epic tragedy of Othello in their fierce style of classical Russian ballet comingled with Martha Graham modernism, Olympian athleticism, and Marcel Marceau mime to produce an experience worthy of Fellini. On a Cubist-inspired set tricked out with crimson, white and honeycombed black panels of rotating scalene triangles our Othello is introduced as a slave – shackled and shorn and witness to his lover’s murder. With her dying breath she gifts the grieving lover with a pristine white lace handkerchief that re-emerges throughout the drama as a symbol of pure love against a backdrop of duplicitous double-dealing. In Synetic’s interpretation we are given a trio of messianic Iagos played quite scathingly delicious by Irina Tsikurishvili, Philip Fletcher, and Alex Mills. Representing Othello’s nemesis and savior, these multi-Iagos cajole, encourage and undermine Othello at every turn by invoking the id, the ego, and the super-ego, while serving as the perfect vehicle to explore the bitter conflicts within their relationship. Roger Payano triumphs as the tragic yet sympathetic Venetian Moor. His sensuous muscular body insinuates fiery passion. His suffering is ours yet otherworldly too. He is burning flame and cool control – dominating the dynamic in depicting mankind’s triumphs and foibles. Combining the responsibilities of costume and set design allow designer Anastasia L. Simes to emphasize and coordinate dramatic themes with vibrant color, shape and meticulous detail.  Simes’ imagination is stylish and specific as she echoes the black, white and crimson in the set, props, clothing and punked-out Iago hairstyles. 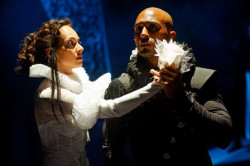 In a setting worthy of covert ops, roving Iago paparazzi with video cameras surreptitiously collect images of Desdemona (played by the enchanting Salma Shaw) with Othello and Bianca cavorting with Cassio. They edit the film, splicing the lovers into alternate relationships, inferring a reverse love affair between Cassio and Desdemona, and fueling Othello’s murderous rage. With hand-held video projectors the evil crew splashes the dream-like images across the stage – allowing us into the nether reaches of Othello’s tortured mind as he hallucinates the lovers’ illicit tryst. Lighting Design by Andrew F. Griffin creates an evocative and eerie dimension, while an otherworldly electronica of music and sound effects by composer Konstantine Lortkipanidze blend in a harmonic of fire meets ice with a wicked cool vibe. The collective force of Synetic Theater’s Othello is a raw and powerful voyage – a totally original interpretation of The Bard’s masterwork. Running time: 90 minutes without intermission. Othello runs through November 6th at Synetic Theater – 1800 South Bell Street, in Arlington, VA, in the Crystal City (Blue/Yellow Lines). For tickets, call the box office (800) 494-8497, or order them online. Watch a highlight video of Othello.