Rain: A Tribute to The Beatles at Hippodrome Theatre at France-Merrick Performing Arts Center

Get back, Loretta! Get all the way back to 1963 when John F. Kennedy was president, Fred Flintstone and Barney Rubble were advertising Winston cigarettes, and The Beatles invaded America. Rain: A Tribute to The Beatles takes you all the way back to where it began. Four performers, David Leon (vocals, guitar, and piano as John Lennon), Mac Ruffing (vocals, and guitar as Paul McCartney), Tom Teeley (vocals, guitar, guitar synth as George Harrison), and Joe Bologna (drums, percussion, and vocals as Ringo Starr) present an amazing tribute to the greatest British rock band to ever invade our nation. They start with their first performance on the Ed Sullivan Show and travel through many live performances like the one at Shea Stadium in 1966. The music covers many years of Beatle discography, including all the classic hits. 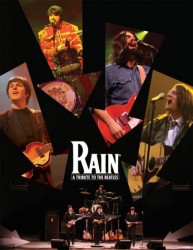 The cast of Rain ' A Tribute to the Beatles. Photo courtesy of Broadway Across America.

Costume Coordinators Robin Robinson and Russ Lease create the look with stunning outfits fron the album Sgt. Pepper’s Lonely Hearts Club Band and stylish suits to match their final performances from the album Abbey Road. Robinson and Lease really give the performance the extra kick with creating the look giving you the feeling that you’re actually at a live Beatles concert.

Aside from being outfitted to look like The Beatles, the fantastic four have such similar vocal qualities that it’s hard to believe they aren’t the originals. They play with passion and sing with heart as they groove around the stage. Joe Bologna, stationed as Ringo Starr at the drums is perky and exciting to watch, as juvenile and jovial as the man himself. Bologna doesn’t get to sing much but when he does his voice is so close to Starr’s that you want to rush the stage and beg for an autograph. Mac Ruffing and David Leon sing in perfect harmony as Paul and John respectively, performing such classics as “Eleanor Rigby”, “Come Together,” and “Hey Jude.”

But the most stunning thing about this performance is not the show itself – but the multi-media maze occurring around the show. Flanking the main stage on the left and the right are two jumbo-tron media screens with a third one at the back of the stage just behind Ringo’s drum elevated drum stand. Throughout the performance incredible designs and footage are shown on these screens. Conceptualized by Video Designers Darren McCaulley and Mathieu St-Arnaud, the video footage is stunning. It create the atmosphere of a true ‘hippy trip’ that you would expect when attending a live Beatles concert. They show footage of actual events in 1964 as well as real advertisements from the time period – including a commercial ad for Prell Shampoo and Curl-Free hair straightening solution. The screens also project back the performance on stage at times, highlighting it in many colors, blending it with distortion effects, and at times the screens even pan out over the live audience. The show is interactive as the performers beg the audience to sing along, clap their hands, and shout out how much they love The Beatles. It’s a real concert experience! 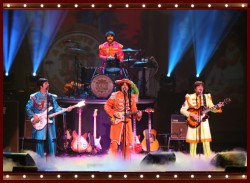 Watch highlights of Rain: A Tribute to the Beatles.

Watch the Beatles on The Ed Sullivan Show.