There’s a buzz around town about the extraordinary performance of Kaiulani Lee in Theater of the First Amendment’s one-woman show Can’t Scare Me, the Story of Mother Jones, which ends its run this Sunday, October 30th. I asked Kaiulani about why she wanted to write and star in this production. I also wanted to learn about the journey of getting the show produced, so I asked Director Richard Davis how the show made it to the stage, and his direction of Kaiulani. 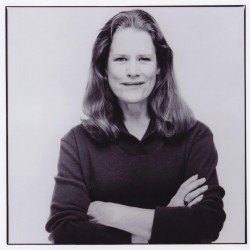 Why did you want to play Mother Jones?

Mother Jones was a voice we weren’t supposed to hear. She was old in a world that was fixated on youth. She was a woman in a society that looked to men. She was poor in a society that revered wealth and she was an immigrant in a society that loved natives. Jones was the first woman to be hired as an organizer. She worked tirelessly for 50 years for the rights of workers and their families. She faced down guns and militias and was imprisoned over and over, and spent months at a time in solitary confinement.

She was known as the Miners’ Angel and the most dangerous woman in America. She’s most famous for her clarion voice that spoke to working people of their human rights and dignity.

What drew you to this character?

As to what drew me to this…

There seems to me to be a frightening mirror image of our present times and circumstances, and those of a century ago. Today’s lower middle class citizens, which was our working class, spent the better part of the century earning rights we take for granted. If we are hard working and honest we deserve a job, a decent place to live, the opportunity to educate our children.

Today, this lower middle class is slipping through the safety net, and in some places the net is being removed. That means hard working Americans can’t find work, for some the jobs are gone, never to come back. For those who can find work, it often doesn’t pay enough to cover basic living expenses and, once again, kids are going to work instead of school. Who looks after those who have nowhere to turn? There are people silently suffering all over the country, often ashamed, thinking there’s something wrong with them, that they personally have failed.

What are our responsibilities? How do we make our systems more fair? Do we have to repeat history? Do things have to get so bad again that people have to take to the streets to be heard?”

Joel: How would you describe Kaiulani’s performance as Mother Jones?

Have you ever worked together before? 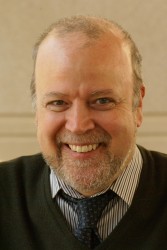 This is kind of remarkable, but when I was a student at the Yale School of Drama in 1981 or 82, Kaiulani had a leading role in a Yale Rep production – actually a co-production with what was then the BAM Theater company — on which I worked as dramaturg. I was deeply impressed (and no doubt impressionable) and remembered her performance clearly years later – when I had the good sense to hire her as an adjunct acting professor some fifteen years ago in Mason’s growing theater program.  We’ve been colleagues ever since looking for a way to work together (again).

What is the toughest challenge about directing a one-woman or person show?

Every single thing matters a lot – since the visual vocabulary is necessarily limited and all the focus is constantly on one actor—so creating variety, creating specific storytelling movement is quite a different task than in an ensemble piece, or even a two-hander. Fortunately, Kaiulani is so gifted that she is able to present umpteen choices to the director and make all believable, giving so much to work with.

Why did you want to become do this project?

I have a passion for American stories, and I think our theater as a whole doesn’t do enough to tell our history – as compared to, say, almost any European or Latin American culture. Getting to know Mother Jones through Kaiulani’s amazing research and writing skill has been a real pleasure, and I hope that comes through to the audience.

How did you get involved in bringing Can’t Scare Me, the story of Mother Jones to Theater of the 1st Amendment?

Kaiulani approached us sometime last year and quietly, even reticently asked us if she could read us some material she had been working on. She brought several yellow legal pads full of handwritten script and notes into a room, read to us for 45 minutes, and we were hooked. Smitten. And committed. We then included it in our annual First Light festival dedicated to developing new work, which proved amazingly useful in shaping the text we now perform.

How has this experience been?

Put simply, it’s been one of the most exciting production processes in my entire career, because of the richness of the subject matter and the incredible skill and commitment of Kaiulani Lee. We’ve also assembled a strong design and production team from a group of TFA regulars and some new blood as well. They were all amazingly supportive throughout.

What are some of the reactions and comments you have heard from audience members?

We had a post-play discussion last Sunday (and will have another Saturday night with Elliott Gorn, a leading historian from Brown who wrote a seminal book on Mother Jones)—the responses were so passionate along two or three themes: “this play has to go on to more productions,” “I thought Mother Jones was just the name of a magazine but now I’m so grateful to know these stories” and “it’s amazing how timely this material from our past has become again.”  The play genuinely seems to stir people in a very positive way.

What did you learn from this run that will help you improve the play?

That’s a great question to ask ourselves after we close and have a little time to digest the experience. We know there is a future for this project and we want to take time to think through what we observed over the last three weeks. I think the shape is sound, but there are always nuances to find, rhythms to adjust, and focal points to sharpen.

What do you want audiences to take with them after seeing the show?

A new or deeper respect for the historic struggles of the working men and women who built (and continue to build) our prosperity, along with a sense that although the nature and location of the some of those struggles may have shifted, we’re not done with the all-American job of creating a better world. And the sense that one person can make a difference, even against the odds. 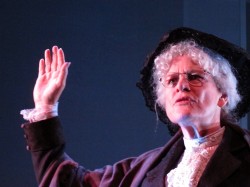 Kaiulani Lee as Mother Jones in 'Can't Scare Me, the story of Mother Jones.' Photo by Todd Messegee.