Producing Artistic Director Blake Robison will be leaving Round House Theatre after the 2011-2012 season, and today he announced that he will become the new Artistic Director of the Tony Award-winning Cincinnati Playhouse in the Park, replacing longtime Artistic Director Ed Stern, who has run the Cincinnati Playhouse for twenty years. During his tenure, the Playhouse was awarded the Tony Award for Outstanding Regional Theatre in 2004. Its successful 2006 production of  Steven Sondheim’s Company, directed by John Doyle, transferred to Broadway and won the Tony for Best Musical Revival. The Playhouse produces eleven productions per year in the 626-seat Marx Theatre and 225-seat Shelterhouse Theatre, and has a huge subscription base of 15,000 patrons. 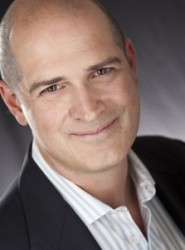 “I think the best thing a leader can do is to help people take a fresh look at an institution that they think they already know.  Seven years ago, I set out to do just that, hand in hand with Round House’s committed Board and talented staff.  We’ve taken some chances together – producing more world premieres, commissioning local playwrights, carving out a more literary identity, and opening our facilities to a bunch of hungry and creative emerging artists. Round House is stronger than ever because of this experimentation. I’m confident that a new person will build on this foundation and take the organization to greater heights.” said Robison. “During the coming year, it will be business as usual as I continue to direct, oversee Round House productions, and manage operations.”

In seven seasons at Round House, Robison has presided over a period of artistic accomplishment focusing on new plays and adaptations of literary classics. The company’s acclaimed Literary Works Project features new adaptations of contemporary and classical novels, re-interpreted through a theatrical prism for today’s audiences. Since his arrival, Round House has produced six world premieres (The Book Club Play, How the Garcia Girls Lost their Accents, The Picture of Dorian Gray, Alice, A Murder, A Mystery & A Marriage, and his own adaptation of Alice McDermott’s Charming Billy) and two American premieres – The Talented Mr. Ripley and Camille. Other highlights have included hugely successful productions of Nixon’s Nixon, Amadeus, My Name is Asher Lev, A Year With Frog & Toad, Treasure Island, and A Prayer for Owen Meany. Last season, Round House partnered with Cleveland Play House to co-produce the first African-American cast production of Horton Foote’s The Trip to Bountiful.

Robison has taken an expansive view of Round House as an artistic home for emerging artists and new companies. He established Forum Theatre and Contradiction Dance as companies-in-residence at Round House Silver Spring, launched the “Kitchen” program to provide free rehearsal space to area artists, and forged ongoing relationships with a diverse collection of partner organizations to perform regularly in the company’s black box theatre.

Sally Patterson, Board President of Round House Theatre, has announced the formation of a search committee to find Robison’s successor.

We wish Blake much success in his new position, and thank him for his many contributions to Round House Theatre and to our theatre community.
__
Here is the announcement from Cincinnati Playhouse in the Park about Blake Robison’s appointment as their new Artistic Director.

Thanks to Round House Theatre’s Marketing & Public Relations Manage Sarah Pressler for sending me the announcement.