Take Me Out at Dominion Stage

Let me start by saying that I admire community theatres who produce new and edgier plays. Dominion Stage has chosen to open it’s season with Richard Greenberg’s 2003 Tony Award-winning play Take Me Out, which exposes racism and homophobia.The production’s all-male cast hits the ball out of the park. 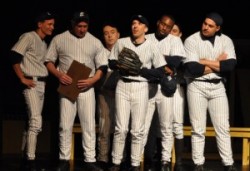 The play centers around a fictional NY baseball team called the Empires. They are thrown for a loop when it is accidentally revealed on network TV that their star – who is African American – is gay. I am not going to give away any more plot – but you can be assured that there are surprises all along the way.

The ensemble is uniformly strong. As Kippy Sunderstrom our narrator for the evening – Richard Issacs keeps the show moving at a nice pace, and in his climatic scene toward the end of the play, he gives a gripping dramatic performance.

Darren Lemming who is the player in the middle of the controversy – played by Jivon Lee Jackson – does a nice job of making you feel something for his character, which is no easy feat because he could have come off as just being a total jerk.

Jimmy Hennigan plays Shane Mungitt  –  a talented but troubled pitcher who ignites the conflict – and avoids turning him into a into a cartoon character. It’s a multi-layered fine performance that plays an important role in the play. 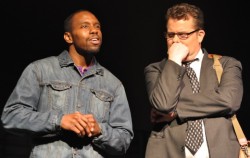 Mason Marzak (Tom Flatt), who is Darren’s business manager, slowly finds a love for our National Pastime. His scene-stealing monologue about why he has become a baseball fan – is simply riveting.

The remaining members of the ensemble work well together: Wain Jenkins (Davey Battle – who is Darren’s best friend, and who plays for another team), David Austin (Toddy Koovitz – the angriest member of The Empires), Jude Rodriguez (Rodriguez – who is never onstage without Martinez), Joseph Aquilina (Martinez – who is never onstage without Rodriguez), Jeffrey Stevenson (Jason Chenier – the new catcher), Olin Nettles (Skipper), and Don Michael Mendoza ( Takeshi Kawabata.- the team’s star pitcher).

Despite a slow start, the pace picks up and Director Matthew Randall’s direction is impeccable.

Much of Take Me Out takes place in the team’s locker room, and Set Designer Hector Lorenzini designs his locker room with a shower in the middle and sliding panels – that function two-fold as the bar and interrogation room.

I applaud Dominion Stage for taking the risk and thinking outside the box. The very talented ensemble will make your night in the theatre a very enjoyable one. This funny and powerful Take Me Out has a lot to say about the effect the game, the high salaries and politics have on the players. Dominion Stage’s Take Me Out should not be missed.

Take Me Out plays through October 23rd at Dominion Stage at Gunston Arts Center Theatre One – 2700 S. Lang Street, in Arlington, VA. For tickets, purchase them at the door or online.

Meet the cast of Take Me Out.