Tartuffe at The Catholic University of America

Moliere premiered his new play Tartuffe at King Louis XIV’s palace of Versailles in May of 1664. It’s the story of a hypocritical con-man’s scheme to marry his benefactor’s daughter, seduce his wife, and steal his fortune, all under the guise of a cleric. It was such a scandal at the predominantly Roman Catholic court that it was condemned and banned. However, Moliere, having a savvy knowledge of royal politics, added an extra act to the play to appease the Sun King. In this edition, the king’s messenger clarifies the ending scene, and it’s obvious to see how the playwright might have been playing into the vanity of the king. 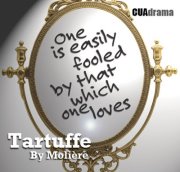 The intimate theatre setting at The Catholic University of America’s Hartke Theatre is appropriate for the bare minimum performance. Very few props – counted maybe five – are used, and the askew furniture decorating the perimeter of the stage nicely symbolizes the topsy-turvy viewpoints of the main characters.The lighing design is a bit static, but the costumes! The costumes are absolutely gorgeous – Kendra Rai spared no detail, and even with Mariane’s (charmingly played by Samantha Smedley) small petticoat malfunction, the costumes are perfectly luscious and era-appropriate.

At first, I felt that it took the actors a scene or two to settle into their lines. Richard Wilbur’s translation is silly and bedecked with rhymes galore, and I wasn’t entirely convinced that the actors were comfortable with the dialogue. After a while though, the actors got into the groove of things, and it was clear how the players benefited from Melissa Flaim’s vocal coaching. Everyone was articulate and easily understood, so no need for props there. A few anachronistic gestures (thumbs up?) afforded some cheap laughs, and the audience seemed to enjoy it.

I was particularly impressed with Griffin Jones’ portrayal of the title character, Tartuffe. He was great as the sly and greasy hypocrite and totally embodied the character, from the slumped shoulder “pious man” in the first act, to the confident and snarky “conqueror” in the second. I also enjoyed Megan Dominy’s saucy maid, Dorine. She was brash, confident, and mouthy, and she played into it very well, almost to the point of flirting with overacting. In general, the whole cast did very well, and I enjoyed watching them have fun with their characters.

Tartuffe plays through October 16th, at the Hartke Theatre at Catholic University – 3801 Harewood Road, NE, in Washington, D.C. The remaining performances are sold out.