Tea and Sympathy at Spotlighters Theatre

It is 1953, and a question of propriety exists in a boarding house for a private school regarding the sexuality of Tom Lee, a student there. Through rumor and an apparent thirst for scandal amongst both the students and the leadership at the school, what begins as a non-event soon becomes an incident. An innocent, sensitive young man and his teacher are heard to have been alone together swimming, and eventually this small revelation threatens to change several people’s lives forever, a situation grown only from a shared paranoia about impropriety. 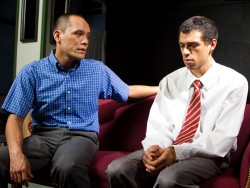 Mr. Harris (Jose’ Teneza-L) comes for a urgent visit with Tom (Justin Johnson-R) after Mr. Harris has been on the carpet with the Dean for most of the afternoon, because someone saw him swimming with Tom. “The Dean will call for you, he will!” Mr. Harris tells Tom. Photo by Ken Stanek – Ken Stanek Photography.

In the history of gay literature, or, more specifically, sexuality-themed drama, this play was a bit of a milestone, as it was a huge hit on Broadway in the 1950s.  Wonderfully, though, Robert Anderson’s Tea and Sympathy, now past the point of quaint old time capsule, can easily be seen to work as a period piece, a drama on incredibly relevant themes to today, specifically: bullying and macho prejudice regarding the orientation of sexuality and the playing of gender roles.

The play centers most on the wife of a boarding housemaster, Laura Reynolds (Karina Ferry), with the title describing her role, to provide “tea and sympathy” to the boys when they need it. As it happens, 17-year old Tom Lee (Justin Johnson) is quite fond of Mrs. Reynolds, and she is fond of him. Nothing is clear, though, about Tom. He does not want to take a girl to the school dance, he wants to play a large, challenging role as a woman (not so unreasonable at an all-boys school, apparently) in the school play, but he is still intent to prove his manliness to his father and the community around him, even if it is beyond him. Laura sympathizes with this complexity. She has a background in the theatre, where perhaps to the audience, but not to Tom, it is understood that these identity complications are not too extraordinary.

This is one of the two primary relationships in the play, the other is between Laura and her husband, Bill Reynolds (Todd Krickler). Something is clearly wrong with their relationship, as he gives her as much distance as it would appear Tom is giving the girls. Over the two acts of the play, Laura’s relationship with both men is closely examined. Interestingly, there is a gradual shift in the story from Tom’s plight to hers, as we realize that her journey as sympathetic friend has taken her even further.

The play may be restrained and of its era, but the text is profoundly affecting in its sensitivity. It is not poetry, but it still really resonates.

Admittedly, the tone is very much of its era, with a great deal of restraint taken in terms of what is spoken of and what is not, and more vitally, what is shown and what is not. This is a subject of homosexuality that some people in the era know of and others are bewildered by, a potential within people that everyone is afraid of. In its signs it shows failure or inadequacy on the parts of the parents of whomever displays them. When it is discussed, people hint at it, when it is seen people often barely understand what they are looking at. To look back at that from 2011 is  impressive.

Perhaps the most shocking moment of anachronistic shock is when refined Laura casually offers the relatively clean cut boy, Tom, a cigarette for his troubles.

What the play espouses to deal with this sexual confusion and frustration is love, real love and devotion: sympathy, over disdain or abandonment or distance. Though it feels like a play as old as the half century it is, this message still stands as an entertaining and positive model for the present, and indeed, the future. 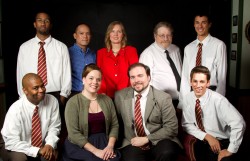 In regards to this production, however, what stands is a little disappointing, though still solid enough to warrant a real recommendation. Every actor is solid, every emotion hits right. Ferry’s Laura is believable, a strong center, but not very interesting. Her theatrical background is not really apparent in her retiring demeanor. There is not a lot of the firey dynamic at play here that there might be.

Krickler’s Bill is actually quite creepy in his very odd postures, played large and strong, with a constant cocked eyebrow and a curled lip, always one twitch away from a naughty touch to the boys, but never his wife. However, no one really outshines anyone, no character seems too much at odds with what is spoken that it cannot be believed. Still, the ensemble is adequate, the play does work.

Johnson’s Tom is sweet and very likeable, strongly suggesting that he really does not know what to make of his own feelings. The tearjerking tragedy of the thing is that he really wants to be good, to be a normal boy, but he simply is not. What Laura knows, and it appears no one else does — except perhaps the present day audience (who really should know this by now!) – is that the world is always better for people’s differences and diversity. A very touching drama unfolds, but it is clear it could be more powerful with some stronger performers and a tighter pace.

Julia Golbey’s costuming is fine, with a moment of excellence: the dress Tom is to wear should he appear in the school play. Its extreme girliness becomes him oddly, even as he seems not to realize what Laura means when she suggests what size to make his breasts. This is the play in a nutshell, a great moment in the show.

Fuzz Roark directed this, and as the main producer and director of Spotlighters, it is his umpteenth solid production with all the normal wants of a show in that compromising little space. Succeeding mostly in making it believable, there is one tragic case of frustrating staging, as the final, key, rather iconic moment happens in a far corner, easily blocked by one of many pillars.  See the show, but sit somewhere with a really good view of Tom’s bedroom.

Running time: About 2 hours  with one 15 minute intermission.