The Crucible at The Keegan Theatre

Arthur Miller’s classic retelling of the 17th-Century Salem witch trials comes to life in DC at The Keegan Theater’s spine-tingling production of The Crucible. Every breathtaking moment of this hauntingly unforgettable show forces the viewer to ask themselves several important questions – and form a true opinion of ones own character by the end of the three hour show. From start to finish – and every moment in between – Director Susan Marie Rhea masterfully molds the play’s inherent tension into her own shape and lights the play with a dark twist of humor. 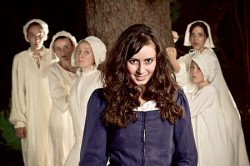 A less than innocent John Proctor (Mark A. Rhea) must watch as his town is turned upside down by the wild accusations of the local children crying,”Witchcraft!” Abigail Williams (an impassioned and titillating Sarah Lasko) effortlessly leads both her followers and Deputy Governor Danforth (Kevin Adams’ unflappable faith and pious sincerity pours from his every word) through a merry dance of death. Reverend John Hale (a truly soul wrenching performance by Kevin Hasser) acts as the voice of reason, though his words are often stronger than his actions.

Proctor’s serving girl, Mary Warren, (Emily Riehl-Bedford’s extraordinary control over her expression and movement enriches the entire performance) and Elizabeth Proctor (a stunningly cold, yet caring Karen Novack) are the last of Proctor’s rocks in the storm – while Reverend Samuel Parris (Colin Smith’s spot on portrayal left an unwelcome feeling in the air after each venomous line) Thomas Putnam (Tim O’Kane’s greedy undertones and pious shell ignited agitated discontent in the audience every moment he was on stage) and Judge Hathorne (a cocky and disheartening Charlie Abel) work tirelessly to see him fall.

Set Designer Mark A. Rhea creates a simple and undeniably clever frame for the show, and Lighting Designer Michael Innocenti creates four delicately unique atmospheres to perfectly match the weighted tone of each Act. Costumer Designer Kelly Peacock highlights the time period, while seamlessly streamlining each costume to fit the base attributes of each character.

5 stars for an all-around chilling show that sends tingles down your spine, and creates an alluring air of drama and hope.

Watch a video preview of The Crucible.