The Pirates of Penzance at The Lazy Susan Dinner Theatre

The Lazy Susan Dinner Theatre presents Gilbert and Sullivan’s The Pirates of Penzance, a two-act operetta that was first produced in December of 1879, and still proudly remains in production to this day, beautifully directed by Kevin D. McCormack.

This production is a particularly good fit for The Lazy Susan, as its rustic atmosphere and unique collection of vintage pieces harkens back to an older time, and is very enjoyable to visit. Dinner is provided before the show, and as the servers (who, incidentally, are also cast and crew members) bring around coffee, it is poured from dainty, spouted tin jugs that you would most definitely not find at a chain location. The warm ambiance found at The Lazy Susan Dinner Theatre is indeed half of the fun of going. 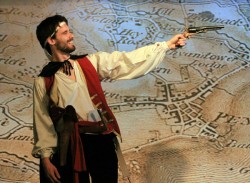 The Pirate King (Terry Barr) in 'The Pirates of Penzance' at The Lazy Susan Dinner Theatre. Photo by James Cullum.

A pirate map covers the back wall in a set constructed by Eric Redmond, Philip Viar, and George Rouse. The hull of a rowboat and grey blocks make up a rocky English seashore, and as the set swivels around, the elegant interior of a castle is shown, complete with a framed portrait of Queen Victoria. Lighting designer Jeanne Forbes sets a playful mood with a spotlight, which at one point has to be called back by a character that teasingly yells, “wake up!” in the direction of the lighting booth. Costume Designers Reggie M. Eusebio, Jennifer M. Pelath, and Kay Cogswell dress the characters in stereotypical pirate attire, but with a twist: they use bold colors such as neon yellow and bright green to make these particular pirates outlandish and silly. The swords are garnished with embellishments such as glittery ribbons and stars, and indeed, one pirate wields a rubber chicken as his weapon of choice. The cast of women wears era-appropriate lace ruffled gowns, and poufy, frilled nightgowns with bonnets to match. Music Director John Edward Niles makes sure that every cue is on-point.

A young man named Frederick (Russell Silber) is all too ready to leave his band of inept pirates, to whom he was apprenticed until his 21st birthday. He assures them that, while he loves them individually, he abhors them as a whole, shouting, “You are too tender-hearted!” After he leaves them, he meets a group of sisters and grabs their attention (as well as the audience’s) with his aria, “Stop, Ladies, Pray!” He falls in love with one of the sisters, named Mabel, a role shared by Aviva Pressman and Elizabeth Gillespie. Aviva Pressman portrayed Mabel on the night of my attendance, and hit (and held!) a full scale of high notes in her aria to Frederic, “Poor Wandering One!” Frederic finds his new life complicated when the pirates reappear and claim Mabel’s sisters as their unwilling brides. The girls’ father, Major-General Stanley (Lyle Blake Smythers), takes advantage of the pirate’s known compassion for orphans and tells them that he is one; a lie that frees his daughters in the fast-paced, energetic song titled “I Am The Very Model of A Modern Major General.” However, just when things seem comfortably settled for Frederic, major plot twists threaten to unravel his life. 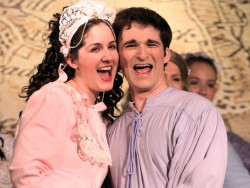 Mabel (Aviva Pressman) and Frederick (Russell Silber) in 'The Pirates of Penzance' at The Lazy Susan Dinner Theatre. Photo by James Cullum.

As someone not exposed to Gilbert and Sullivan before this production, I was pleasantly surprised by how entertaining the language and the music was for someone in their twenties like me. I was expecting the diction and action to be somewhat arcane and confusing, but, to my delight, was proved wrong. At times it became hard to understand the actors, as nearly every line was sung at a fast clip and was easily buried under the accompanying music, but it was not enough of a problem to be very discouraging.

The gem of this production was the downright silly dance moves choreographed by Elizabeth Gillespie. From impressive jumps and slapstick leaps to a precise chorus line, the dancing was a pleasure to watch. I especially loved when the pirates formed themselves into a ‘ship,’ and proceeded to ‘sail’ across the stage during the entertaining “Oh, Better For to Live and Die.” The acting was also wonderful, and a special nod to Terry Barr, whose lively portrayal of the wimpy-but-proud Pirate King makes my personal list of favorite performances of the year, specifically in the number, “With Cat-Like Tread, Upon Our Prey We Steal.”

The cast immediately lined themselves along the wall after the show, and thanked the audience members personally for coming as we filed out of the theatre. From the welcoming environment and good food to the thrilling entertainment, I always have a wonderful time when I visit The Lazy Susan Dinner Theatre.

Running time is approximately 120 minutes with a 15-minute intermission.

The Pirates of Penzance plays through November 27th, at The Lazy Susan Dinner Theatre – 10712 Richmond Hwy, in Lorton VA. Make your reservation by calling (703) 550-7384. Here is the remainder of their 2011 season schedule.