The Rivals at Center Stage

Center Stage’s production of Richard Brinsley Sheridan’s The Rivals will set your heart dancing! You’re in for delightful evening of light comedy and a profusion of beautiful colors. The entire cast is spellbinding.

David Burdick designed eye-popping costumes based on 18th Century design, and found a way of combining 21st Century heels, tie-dye jackets and argyle. There are floating white ruffles, fuchsia organza flowers placed imaginatively on a skirt and bodice, swirling yellow butterflies on dresses of gold and ripe swatches of orchid. All these astoundingly beautiful costumes will send you into a visually rich rapture. 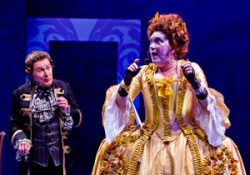 David Margulies and Kristine Nielsen in' The Rivals.' Photo by Richard Anderson.

The play begins – well – it begins before it begins. As Fag, (Danny Gavigan) the servant, enters amid shades of blue (that are too amazing to describe), and we see a person dedicated to the cleaning and care of his master’s home. He polishes, he swipes, and he lies on the floor until the polishing is done. Gavigan wonderfully sets the stage for the sentimental journey he beckons the audience to take.

In this enticing comedy of manners, everyone becomes involved in finding a suitable husband for the misunderstood Lydia Languish, the flirtatious Zoe Winters. While her driven desire to inhale romantic novels has created a world where love fulfills her fondest dreams, the audience soon finds that no one can live up to her illusions of the perfect lover. Scenic Designer Caleb Wertenbaker and his Assistant Jennifer Stearns add gorgeous drop-in gardens, and screens that decorate a feminine boudoir one minute and, when rotated, become a man’s study.  There is a white harpsichord which is played by many of the characters throughout the play. Ruffled chaise lounges quickly changed to leather. They all add to the magic of this production.

From Lydia’s chambermaid Lucy (Libya Pugh) we learn that she holds the secrets of her mistresses hidden love affair. Lydia’s aunt, Mrs. Malaprop, (Kristine Nielsen), insists that Lydia stop the nonsense and get on with finding a husband. Nielsen is without a doubt the most engaging, delightful, astonishing female character I have seen grace any stage in quite some time. Nielson brings Mrs. Malaprop to life and she is fantastic!

Two suitors soon vie for the hand of Lydia – Captain Jack Absolute (Manu Narayan) who is accessible, charming and handsome – and Bob Acres, a country squire (Jimmy Kieffer) who is very funny, a little overwrought and much out of his league. The twists come and go in the pursuit of poor, dear Lydia’s hand. Yet, in the message of 18thCentury comedies, love holds true through the complications of a suitor’s duel and a heavy handed father – Sir Anthony Absolute (David Margulies) – who insists his son Jack marry a woman he thinks his son has yet to meet, or become in his words, “a hypocritical dog.”

Throw into the mix Lydia’s cousin, Julia Melville (Caroline Hewitt), her overzealous, pompous, naive suitor, Faulkland (Clifton Duncan) and the high-spirited, mocking, frenzied Lucius O’Trigger, (Evan Zes) who helps the rivals write letters to Lydia and you have a maze of merriment that will give you belly laughs throughout the evening. Margulies, Hewitt, Duncan, and Zes are all hilarious, and show great comedic timing.

The Rivals is the most vividly impressive show I’ve seen in years. It is a fresh, seamless, and effortless production that will razzle-dazzle your senses. The Rivals is absolutely stunning!

The Rivals plays through October 30th at Center Stage’s The Pearlstone Theater – 700 North Calvert Street, in Baltimore, Maryland, For tickets, call (410) 332-0033. or order them online.