Sometimes an actor is alone on stage with the other performers, working near them but not with them. This can be fine if the play allows for it.

Flying V Productions‘ newest play, Tough!, has a very human script. It presents all kinds of varied and humorous angst in a single, unbroken 90 minute scene.  It’s human, it makes sense, and it never flags from honesty for seeming out of touch with normal everyday interaction. The voices of the characters seem to be exactly the voices that I have known many times, both coming from my own throat and from friends’. This is what stressed out young people say to each other. 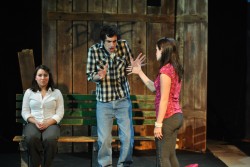 This is exactly the horrible stuff I have said myself on occasion.

(It’s awful! Why can’t I speak better than that? What can’t I be more poetic, more sensitive, not just to my needs but to my partners’ or my friends’? Why?!)

The play is by George F. Walker, a prolific and well-reputed Canadian playwright, published it in 1993, but it has a lot of timelessness to it. It’s the very comfortable, vulnerable voices of the young, urban, emotional, middle or lower middle class American kid. But who am I kidding? These are universal thoughts. The boy says he is in love with his girlfriend, he wants her, but he doesn’t just want her – he wants others… more. Something he just can’t describe. Ah, the classic male condition… But the girl feels the same way! And he didn’t even realize it!!!!

Love sucks. It’s all bargaining emotional games. And sometimes, it’s real drama. Sometimes, the things we need to say are really going to change our whole lives: “Honey, I love someone else.” And the mad, awkward urgency of that moment is exactly what Tough! is about, sustained for 90 minutes.

The problem is that sometimes people cannot simply wiggle out of the painful truth. The dead solid reality of the thing we fear the most is just happening. In Flying V’s Tough! it is the one girl arguing with her boyfriend about how they feel about each other – then revealing that she is pregnant – with his child. When the scene does not end there, and everyone stays present, facing the tough immediate response, taking the hard hits as they come – long pauses; stumbling, lost voices; screaming and crying; silly, selfish awkwardness – an audience might just run for the hills or fall in love. It all depends on what a production does with this very heavy, funny material.

And Flying V got it on about three quarters of the required gravitas and dramatic intensity. They get the vulnerable, sensitive, and selfish young man in the excellent emotive powers of Zachary Fernebok. They get the funny staging in a trashy urban playground. They get the funny, tough, possibly lesbian, best friend to the pregnant girl. They get the sense of the limited world of the emotionally needy urban youth on stage, and a lot of the pieces of the puzzle are there. However, they do not get the comedy of the pain.

Or at least it is not emphasized.

This is supposed to be quite the funny play. It is even sold in Flying V’s publicity as a comedy. And I laughed a bit. So did much of the audience. Bit it is not the riot at many times that the script offers itself to be. The relationship pain that is there is just there.

The lead queen of pain, Tina, the girl we need to care about, who is professing pregnancy and asking her boyfriend if he (or we) can stay with her, does not consistently resonate with her angst. Unfortunately, Kristen Garaffo’s Tina just does not resemble the character she is playing. She is the right age, but not the right temperament – when the lines early on call for Tina to be a sobbing mess, cared for her by her comic best friend and emotional bodyguard, Jill, (a guffaw-worthy scene, surely, with some of the wonderful oh-so-awkward George F. Walker dialogue supporting her), she is stone sober cool and in control. Her vulnerability never slides. She conveys marvelous ambivalence and sadness in her stillness later on, when she shuts out Fernebok’s Bobby for a time, but her range in grief and exasperation is nothing like what could come. Her plight seems downright mundane and at times unnervingly simple.

Garaffo’s emotions are apparent, but they do not speak to the overwhelming and hysterical, and hysterically funny, pain that these lines call for. Take a cultural hop with me, and imagine Buffy and Willow from Buffy the Vampire Slayer, or even Lucy and Ethel from I Love Lucy. Those are the kinds of characters we have here, two strong best friends – long sufferers of the ways of men and boys.

If Tina were Willow, she would not have to worry though, as when violent Jill/Buffy threatens to kick Bobby’s face in, she could really do it. Because she slays vampires. But there are no superheroes in this show. And pop culture references are not the point at all. These characters’ voices would resonate probably with cave people, these basic sex and romantic responsibility themes are so timeless. Lucy might get upset at Ricky and Ethel might tell him what for, but the awkward twisted uncertainty of love is there in what keeps pulling them back together. Bobby has trouble leaving Tina just like Ricky never left Lucy after all the years of her antics (well, not on television, anyway). He looks to be more at fault here, but he’s so endearingly earnest as he wants to do right. Despite his faults, he is likable, and maybe we can see what Tina saw in him. Ah, messy love.

The comedy is writ. Katie Jeffries’ Jill is quite funny, but the comic chemistry is not there between her and Garaffo. Jeffries’ substantial comic talents are much in use a foil to both Bobby and Tina, but the minute the play falls to Garaffo to deliver the funny pain, it gets stony and serious and hard. And dull. It is difficult to care for someone who cries and pines but does not lose control.

This is familiar stuff, intentionally tedious, and the play does not work when its center is not sympathetic, as the tedium immediately begins to eat at the audience. Actor chemistry is missing, and though there is clear talent in all of the players here, something just does not quite click on a punchline far too often.

Jason Schlafstein, Producing Artistic Director of Flying V – like almost everyone involved in Flying V, is a young and up and coming presence in the Washington D.C. theatre scene, working with several theatres at once in the area, including Theater J where he is the Casting Associate and Rep Stage where he is the Production Manager – directed this with an emphasis on the melodrama of the suffering preferred over the humor.

When it comes to casting, you cannot always get a Lucille Ball or an Alyson Hannigan, sure, to take those kinds of parts. But Garaffo’s great gifts for musical theatre, as seen this summer in New Musical Foundation’s hysterically funny Who’s Your Baghdaddy? or How I Started the Iraq War at Fringe, suggest she is a great choice for comedy. She was a wonderful war-making villain by broad strokes in that play, but the show of complexity required for 90 straight minutes in this very challenging part might require something closer to a Sally Field or a Dianne Wiest than even a Lucille Ball. Strong comic timing and great emotional depths are required in equal large doses for this sort of role.

Andrew Berry contributed the set design, and Colin Grube did the technical direction on this production, and both have something to show for it, as the set really does work to bring the urban nowhere that these kids are from, if not bound to. A little reminiscent of the 7-11 storefront of Suburbia, this set, with a good deal of simplicity, reaches some semblance of a neighborhood corner, where the adult looking kids are still growing up.

More inventiveness might have been applied with the swings and some of the lovely playground set. Surely the awkward staged combat in the play might have made great use of some of it. More can be mined from this script too, and while it was a very ambitious one to tackle for this young company, I would love to see what a few more weeks of evolution might produce. However, Tough! is only open for a brief run. And the script is remarkably strong. If you go see it, beware of bringing the wrong date – it contains some pretty uncompromising relationship talk.

Tough! plays through tomorrow October 30th at 2 PM at The Writer’s Center – 4508 Walsh Street, in Bethesda, MD. Tickets can be purchased at the door.