Visible Impact – conceived and directed by Georgetown University Professor Susan Lynskey – was written by the show’s talented ensemble of performers – in collaboration with Suzanne Richard, Artistic Director of Open Circle Theatre, Rick Curry, S.J., founder and Artistic Director of the National Theatre Workshop of the Handicapped, Willy Conley, professor of theater arts at Galludet University. It’s part of the The DiverseABILITY Forum , which started last night at Georgetown U, and runs through October 29th. 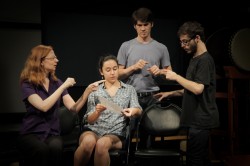 Professor Susan Lynskey (left) and student actors rehearse the 'Visible Impact,' an original work that is part of the DiverseABILITY Forum at Georgetown University. Photo by Paulette Waltz..

This powerful and heartfelt play, which stars Georgetown U and Gallaudet U. students, takes us on a journey of the disabled and deaf communities. Through almost 25 sketches of autobiographical and personal memoirs, and with a touch of Shakespeare, they illustrate the hardships these two communities continue to face and endure.

In a casting office, we hear through phone calls how it is still difficult for disabled to get hired. We are shown the lack of needed sensitivity when a cast a full hearing cast is hired for a production of Children of a Lesser God rather than hiring a deaf actress, and how a sighted actress was hired to play Annie Sullivan in The Miracle Worker. It was shocking and sad to see that there is still so much prejudice and discrimination – not just in the arts – but everywhere.

The standouts for me included a Walmart sketch in which a one-armed man (Chase Meachem) and a ‘little person’ (Suzanne Richard) are placed at the front door to greet the customers. He just wants to have a normal conversation without being stared at. She torments customers because she knows they will never fire a handicapped person. It’s funny and poignant at the same time.

There’s a gut-wrenching monologue about a woman (Sarah Querhn) who flew a medical supply helicopter, ended up in a horrible accident and is now in a wheelchair. As the sketch progresses the body parts of one of the soldiers appear as puppets in a graveyard and begin to speak.

Citizenship shows what happens when a deaf girl (Kyleigh Herrera) meets a first-time interpreter (Marissa Pascual) at her citizenship hearing. I won’t give it all away – but The Star Spangled Banner is involved.

A coffee house song about dyslexics is belted out by Betsy Helmer. I applaud Ms Helmer for singing the song as a dyslexic would visualize it and sing it.

At this performance – as there will be at all performances of Visible Impact – it was sign-interpreted. Tonight, Aaron Halleck was on a TV monitor mounted behind the audience, in order to assist the cast with their cues.

Visible Impact is blunt and unflinching in the way it describes the hardships and challenges that disabled and deaf members of our community face. But at the same time, the play reminds us of the strength and perseverance of these two communities and how their stories create powerful theatre (like this production), and how diversity enriches our lives.

I applaud Professor Susan Lynskey and company for mounting this ambitious undertaking. It is no easy feat to stage a production with 14 performers, projections, and sensitive material. 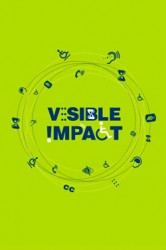 If you want to see a thought-provoking piece of theatre – visit Georgetown University and see the very moving Visible Impact.