Wit by Margaret Edson is a play about science and letters, and an English professor diagnosed with terminal ovarian cancer. The Bay Theater Company and Director, Richard Pilcher, do a fantastic job with this production. The acting, design, and direction are flawless. 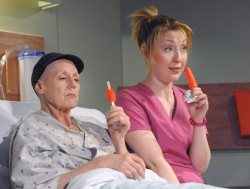 The action takes place in Vivian’s room at the University Hospital Comprehensive Cancer Center. Jo Ann Gidos, the Prop Mistress, provides the show with real wheelchairs, hospital beds, IV poles, and everything except X-ray and MRI machines. The set is meticulously realistic.

Sound Designer Andy Serb incorporates hospital sounds during the set changes. As the interns change the doctor’s office into a hospital room, it’s very natural because the doctors and nurses are buzzing and working just like they would in a real hospital. The lights are interesting because there is  no color lighting until the last scene of the show. Colorless lights are uncommon in theater because this pales the actors, but in this case it worked because the show is about a cancer patient. A brave move on the part of Lighting Designer Preston Strawn.

Dr. Jason Posner (Matt Bassett) is Vivian’s ambitious young doctor. Bassett perfectly plays Jason; he is attractive and cold, smart and pushy, oblivious to Vivian’s sarcasm and irritation, and encompasses the detached medical bureaucracy. Working with Dr. Posner is Susie, a young, caring nurse (Mundy Spears). Susie is the only warm character in the play, and because of it, she is put down as slow and stupid. Spears knows how to draw compassion from the audience. As Susie, she humanizes the soulless healthcare system, and she sees Vivian as more than a specimen for research. Amy Kellet, Kelly Armstrong, Ryan Brown, and James Poole are also do fine work as the interns. 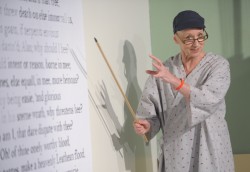 Rena Cherry Brown is phenomenal as Vivian Bearing, an English Professor and a doctor of John Donne’s “Holy Sonnets”, who’s dying of advanced ovarian cancer. When she finds out about her condition – instead of listening to the doctor’s rambling – she talks over him to the audience, simulating out loud her train of thought, and criticizing his choice of words.  She is asked, “How are you feeling today?” routinely by her nurse and doctors, and the audience gets her annoyance and irritability because Brown makes it funny. She successfully portrays herself as an English professor – a word and wit expert – and not a pitiful cancer patient, “The attention was flattering… For the first five minutes. Now I know how poems feel.”

Throughout the play there are a series of flashbacks that reproduce her university lectures, which show the usual reactions from her students (who miss Vivian’s and Donne’s point, and are mocked), and educate the audience on Donne’s “Holy Sonnet 9”. Vivian constantly tells about her work, research and analysis of John Donne, throughout most of her chemotherapy, refusing to acknowledge her sickness seriously.

Wit is a brilliant play, and this production is a ‘Must-See.” The acting is phenomenal. Audiences will learn about healthcare, poetry, death, and will laugh and cry.

Running time: 1 hour and 45 minutes with no intermission.