Little Women at The Colonial Players

Celebrate the coming of the holiday season with a classic family favorite in The Colonial Players production of Little Women The Musical. Directed by Beverly Hill van Joolen, Little Women The Musicalpresents a heart-warming melodramatic tale of a family unity and all the ways in which a group of sisters can stay strong through the struggles of the world. The familiar tale, based on the book by Louisa May Alcott, tells the story of the four March sisters, and their struggles to stay united as a family while their father is called away to serve in the Civil War. Each has a different outlook on life – and as they encounter neighbors, relatives and other quirky characters the four sisters grow and share their lives with the audience in a soulful tale not to be forgotten. 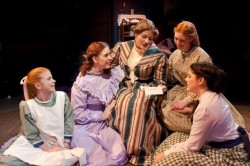 This unique production sets a new standard for authenticity in regards to sets and props. With extensive research done by the cast and crew, the Colonial Players really set the atmosphere of north-eastern America in the late 1860s. Set Designer Pat Brown and Properties Designer Lois Banscher work together to create a world of yesterday in this intimate theatrical space. Their attention to detail is astounding  -using real furniture from the period acquired from antique shops. But the amount of furnishing is a bit overwhelming. For a family that is meant to be dreadful, as described in the text, and relatively poor – they have a plethora of possessions decorating their parlor and attic.

And the beauty of all these wonderful set pieces is nearly lost in the lengthy scene changes. The audience spends in the upwards of five minutes each darkened scene change watching crew members, cleverly outfitted in period costumes of household servants, shift furniture pieces around to create the next scene. While director Beverly Hill van Joolen provides the audience with music of the period sung beautifully by varying chorus girls (Paige Miller, Emma Panke, Maddie Howard, Emily Berry, Pam Williams, Lucy Bobbin, Sarah Duleh, Karen Grim, and Jack Venton) during these changes the songs are often slowed to match the pace of the on-stage shift; overall proving to be very distracting. It drastically slows the pacing of the show and stifles the momentum that the characters put forth in attempts to keep the scenes fluidly connected.

The costumes are a result of much research and hard work from costume designer Julie Bays. Her work is phenomenal as each character is presented in a skirt or suit befitting of their gender and social status. Bays provides gorgeous dresses for Meg (Kaelynn Miller) Amy (Hallie Parrott),  and Jo (Emily Sergo) in shades of lilac, peach, and rusted scarlet respectively, complete with full hoop skirts and ruffled cap sleeves, when they are attending the ball. Her genius is again seen in the many regal outfits adorned to Aunt March (Beth Terranova) from the haughty black ensemble she wears upon her first arrival to the bright green full hoop and veil get-up she dons toward the end of the show. You really get a good sense of 1860’s fashion from Bays costume selection in this production.

The play is filled with many splendid characters, each with their own unique personality. Marmee (Wendy Baird) the mother of the four March sisters, is a beautiful compassionate character who sings with gusto and feeling during her number “Days of Plenty” late in act II. Baird presents a firm but kind motherly character that dotes upon her children but deals with them more sternly when their actions warrant it. Her emotions reverberate in her voice when she sings and she does so with perfect pitch. And the four sisters create a homely sense of unity amongst themselves; singing and dancing together with Laurie (Jeffrey Walter) during the number “Five Forever.” They create a true sense of family and belonging in this scene as if the actors really were sisters. Jo (Emily Sergo) is the storyteller. She writes stories, but also tells tales of her dreams and her travels. Sergo is particularly emotive in scenes where she  plays opposite various men. Her face is expressive and her physicality defying that of what a proper young lady in the time period should be. Sergo exudes angst and moodiness when she doesn’t get her way and all of her stronger emotions are played at the peak of a vocal crescendo.

Beth (Bronwyn van Joolen) plays a beautiful scene with Mr. Laurence (Ed Wintermute) where they sing a duet, “Off to Massachusetts.” They sing harmoniously together each smiling with ease despite their characters social, gender, and age differences. Another moving number comes from Meg (Kaelynn Miller) and Mr. Brook (Chris Leabhart) when they sing “More Than I Am.” The couple truly sing to each other, lost in each other’s eyes with an exultation of love in their voices. 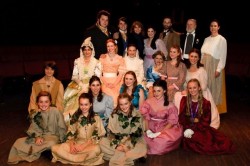 But the true show-stoppers are perhaps characters we wish we’d seen a little more of. Aunt March (Beth Terranova) is a comical riot. While not necessarily intended as comic relieve in this milquetoast melodrama, she presents laughable moments for the audience to enjoy when she encounters her various nieces. Terranova’s performance is brilliant as she struts about the stage in her regal outfits, stomping her cane into the floor to call attention. She alludes to an air of haughty wealth with her gestures and harsh vocal tonality. Terranova’s commitment to the character is intense as she attempts to groom Jo (Emily Sergo) spitting cleverly veiled insults in the girl’s face. And then there is Professor Bhaer (Kevin James Logan). A German border encountered by Jo while living in New York. Logan portrays this professor with idle quirks that appear mostly during interactions with Sergo’s character; awkward twitches, a level of insecurity in his speech; all culminating in a melodious expression of his feelings during the solo number “How I Am.” Logan holds a subtle German accent; belaying a man who has been in the country of America for sometime but is still a foreigner. His voice is like a siren when he sings, filled with purpose and emotion, a wonder to hear and see upon this stage filled with women.

Gather up the family and enjoy the classic tale of Little Women The Musical.

Little Women The Musical runs approximately 3 hours with one 10 minute intermission at the Colonial Players Theatre – 108 East Street, in Annapolis MD. For tickets please call the box office at (410) 268-7373, or purchase them online.

Watch a video preview of The Colonial Players’ Little Women The Musical.