A Broadway Christmas Carol at MetroStage

What do you get when you combine Charles Dickens’ Christmas classic A Christmas Carol with slightly altered show tunes from the likes of Oklahoma, Cats, and The Phantom of the Opera, Annie, and Sweeney Todd? Why, a Broadway Christmas Carol! This cheeky production provides a riotous and hilarious take on the traditional tale. 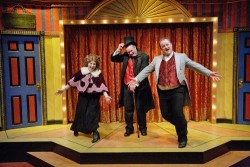 Tracey Stephens, Michael Sharp, and Matthew A. Anderson, as Mr. and Mrs. Cratchit and Scrooge in the show’s final. Photo by C. Stanley Photography.

The production involves three entertainers, one pianist, and slightly “revised” versions of popular Broadway tunes! The cast of Michael Sharp (Scrooge), Matthew A. Anderson (all other male roles), and Tracey Stephens (all female roles) provide a toe- tapping, light-hearted, and animated take on the tale of Scrooge. Michael Sharp is a Helen Hayes Award winner and not too shabby a hoofer; however seeing as he is also the production’s choreographer, perhaps this is not too surprising. But the Scrooge of this tale is a bit different to many other adaptations. Can you conceive of a Ebenezer Scrooge that belts out “I’m in the Money” or ogles a maiden seeking Christmas alms for the poor? This Scrooge is dandy and irreverent, transformed by some “different” ghosts of Christmas’s past, present, and future.

Matthew A. Anderson is the actor providing “all other male roles” and this he does with deftness and humor. He is Bob Crachit, he is Tiny Tim, he is Scrooge’s nephew, and he is the puppet meister of the character Ignorance. The most interesting character he portrays is the The Ghost of Christmas Past, who reminds one of Father Christmas. Intrigued yet? As with all the actors he dances, he prances, he jokes, and he cajoles. His roles demonstrate his chops by the diversity of spirit and character.

The first thing you will notice about Tracey Stephens is her voice! Powerful, rich, and full-bodied….she was born for the theater. Broadway numbers are her forte! However, she also easily navigates the quick female role changes (and associated costume changes) with panache and vigor! Whether she portrays the Mae West-like Bob Marley or Bob Crachit’s less than forgiving wife – this lady captures your undivided attention and contributes to the powerhouse trio of actors.

Musical direction and pianist Elisa Rosman provides jazzy and expressive music while providing some humorous repartee. She plays to the audience and actors and provides the perfect measure of irreverence. The play, which was written by Kathy Feininger, finds fun and frivolity where it may in the traditional tale – but the combination with show tunes is sometimes an obvious selection and sometimes playing parody on the original Broadway intent. It’s a creative amalgam of two very different elements that bring a smile to your face!

The very intimate MetroStage is an environment where you can’t but help to become a participant in the production. The set, designed by Alison Campbell, is simple and acts as the backdrop to all the action and events. The costumes are fun-filled period pieces with Michael and Tracey changing into outrageous wigs, hats, and accessories to become their very different characters. Janine Sunday, the costume designer provided changes as to indicate very different characters, but allow the actors to change at a fast and frequent pace. The sound was fantastic in the little hall and reminiscent of Christmas caroling or a family holiday sing along. Sound and lighting was used effectively to designate elements such as the distinctive Christmas ghosts, the travels to the past, present, and future and emphasize significant Broadway “parodies”.

All in all, if you’d like a fun, off-beat, and good-time skit, without a lot of existential meaning, this is the show to get your holidays started.

A Broadway Christmas Carolplays through December 18th at the Metro Stage – 1201 North Royal Street, in Alexandria, VA. For tickets, call (703) 548-9044, or purchase them online.