‘A Quick 5’ With Alexandra Silber

Alexandra Silber will be back performing at The Kennedy Center on Dec 2, 2011, at 7:30 PM as part of The Barbara Cook Spotlight Series. She was last seen there in Master Class starring Tyne Daly. Alexandra’s London theatre credits include Carousel, Fiddler on The Roof and The Woman in White. She recently made her NYC debut in Hello Again at The Transport Group. 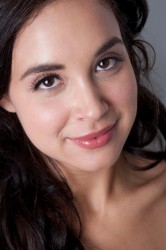 You will be performing at The Kennedy Center on Dec 2nd in the Barbara Cook Spotlight Series. Can you give us a hint of what you will be singing at your concert?

It feels odd to call my cabaret act London Still a concert because it feels like more of a theatre-piece. Probably because it tells a linear story; the tale of why I left America as a teenager, and why I returned. It is a classic tale of ‘there and back again’’- from Odysseus to Bilbo Baggins to Dorothy – we all return to the place where we began and are changed. It is a universal human experience.

That said, I pepper it with my own details, from the serious to the utterly self-deprecating (one of my very favorite things to do). You’ll hear a great deal of Kander and Ebb, Kurt Weill, and of course Rodgers and Hammerstein, but it is also peppered with some jazz, pop and even some opera.

What are your earliest memories of performing?

I remember my very first Ballet recital when I was 5 – my class ran across the stage flapping our arms. My mom made everyone’s wings. I had bangs. There was cuteness. I also cut my teeth in the third grade in a production of Annie at El Rodeo School in Beverly Hills. No, not what you are thinking, I circumvented ever playing the title character and in fact played Miss Hannigan. That’s right. I was fierce and mean and convinced myself for years that she behaved so badly because of her drinking. I took it really seriously.

A couple of weeks ago I went to the opening of the Kennedy Center’s beautiful production of Follies on Broadway. I was pleased to casually drop the following piece of trivia:

“I really don’t know this musical at all. I know the premise and some of the songs, but mostly I’m a Follies virgin. Though, I would be totally lying if I said that I didn’t close the 5th grade talent show with “Broadway Baby.” Well, I did. I want to say I closed the 5th grade talent show with “Losing My Mind,” but it would be a lie. A great, funny lie, but a lie nonetheless. Anyhow I had a full-on period suitcase and concept costume. 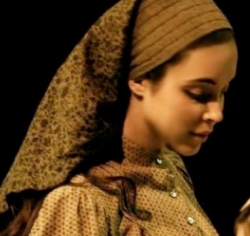 Alexandra Silber as Hodel in 'Fiddler on the Roof.'

An interesting example: when we began initially working on Fiddler on the Roof we were met with a perplexing issue about accents that went on for weeks. Fiddler is, to us, an American musical, possibly one of the best every written and a classic. Everyone played Lazar Wolf in High School. Everyone has been to at least one wedding where “Sunrise Sunset” made everyone melt.

But in Britain, they do not have that relationship with the piece, the characters, the story. As an officially Christian country they are less generally familiar with Judaism as a widespread cultural attribute.To them, it is a European story… because it technically is. But most fascinating of all? Why in the world would these people speak in American accents in Europe? As American theatre-goers we do not hear American accents as “accents,” for us it is the neutral sound. It makes perfect sense that everyone is stomping around the shtetl sounding like they are from various parts of Jewish America because to Americans that is a relevant parallel.

So. We started with the concept of “neutral accents” – all the Jews in Anatevka had the accent we all hear on BBC News called “Received Pronunciation” (or “RP”). That didn’t work because of RP’s projection of higher-class and education – all of a sudden Tevye’s daughters sounded like they were from private schools rather than ready to milk cows in the dead of winter. Weeks of trial and error later we decided upon a European Yiddish accent (ie, Eastern Europeans that learned to speak English in England), the Russians, in contrast, used RP. It worked. A completely unique issue to the British approach to the American musical and here is my ultimate point: Americans write wonderful musicals. The British re-interpret them, wonderfully. As a British actress (up until a couple of years ago) I am proud to have cut my professional teeth there.

AND: Let’s not forget how much Americans love popular British musical theatre in return – thank you The Phantom of the Opera and Mamma Mia!. Just saying.

3. I have to say, I truly believe that people love great theatre no matter what the geography.

You were in Master Class here at the Kennedy Center with Tyne Daly. What were some of your fondest memories of that experience? 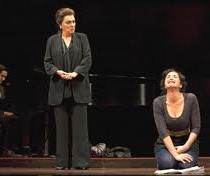 For the 2009–10 theater season, the Kennedy Center presented Terrence McNally’s Nights at the Opera including The Lisbon Traviata, Master Class, and Golden Age, a special collection of three McNally plays on one of his favorite subjects – the opera. Without any exaggeration, being a part of that triptych of McNally plays was one of the most fulfilling artistic experiences of my life.

So often as an actor, one can feel as though their contributions are limited – of course ideally theatre is collaborative, but we often have to take the visions of the director, the playwright, the designers into account, and though we hopefully are able to reach deep within ourselves and give, the greater principles as to why or what we are giving to can get muddled. It is rare that we get a chance to reach to offer something beyond “a great night at the theatre” and contribute to a Greater and Universal veneration of Art Itself.

But sometimes experiences come along that make you feel as though you are making a contribution not only to the piece you are involved in, to your playwright, fellow actors, or the immediate audience members who will be in attendance, but to a greater cause – sometimes you get the opportunity to be a part of a contribution to art itself. That is what the Terrence McNally Triptych was: a celebratory contribution to the world of interpretive art itself, and I felt as though I was allowed and able to weave myself deeply into that experience on every level. I made lifelong friends across all three productions, and became reacquainted with myself and my life as an American (in my nation’s Capital nonetheless!)

It was just a “gig” (I mean, of course not, I was sharing a stage with Tyne Daly in one of the most important venues in the world). The point is: I was a part of something I believed mattered on a cosmic scale.

My time in D.C. that spring also was a period of real transition and personal healing, not to mention the fact that Sophie DePalma went in to be the role in which I made my Broadway debut. But it all began here at the Kennedy Center. May every national artistic institution be so inspired.

I remember spending time in the Green Room we all shared – every one of us playing cards and laughing in an array of different period costumes. I remember sneaking backstage to the Family Theater from the Eisenhower to watch the second act of Golden Age from the wings (because I was only in the first act of Master Class!). And best of all? I remember singing at Terrence and (his now husband) Tom’s wedding just outside the stage door along the banks of the Potomac on the most perfect spring day in the history of the world.

Are there any roles on Broadway now that you would like to play?

I have always strived to do great work with gifted people regardless of the location, but some dreams/itchings include Nora in A Doll’s House, Rosalind in As You Like It, Anna in The King and I, Irene Malloy in (either!) The Matchmaker or Hello Dolly!, and an absolute dream would be to play Amalia Balash in She Loves Me (which, of course, Barbara Cook, the curator of the Spotlight Series in which I am appearing, originated herself). 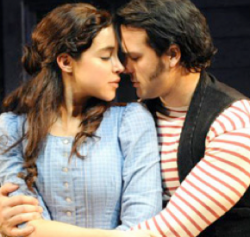 But truly, there would be no greater dream than getting to revisit Julie Jordan (of Carousel) at home on Broadway. I have been so fortunate to portray her in the West End, in my birthplace of Los Angeles, California, and bringing it to New York would be a dream.
_
Watch Alexandra Silber as Julie Jordan in Carousel at Reprise Theater Company in LA, singing “If Loved You” & “What’s the Use of Wonderin’” with Robert Patteri.

Go behind the scenes with Alexandra Silber, as she prepares at the half hour call to play Julie Jordan in the West End production of Carousel.