‘A Quick 5’ With Charles Weldon

Charles Weldon is the Artistic Director of The Negro Ensemble Company in NYC. His stage credits include Hair, Big Time Buck White, A Soldier’s Play, Two Trains Running and The Piano Lesson. He recently directed Two Trains Running at Prince George’s Community College, and is currently performing in To Kill a Mockingbird at The Denver Center for the Performing Arts, where he is a company member. You probably remember him as Blade in the comedy classic Stir Crazy opposite Richard Pryor. In 1960, Charles had a hit song called “Diamonds and Pearls” with his group The Paradons. I am truly blessed to call Charles my friend. There is no one classier.

How did you begin your association with the The Negro Ensemble Company?

In 1970, I was on Broadway with a musical play Big Time Buck White with Mohammad Ali. When it closed I was told there was a black theatre company having auditions, I did and the rest as they say is history….. 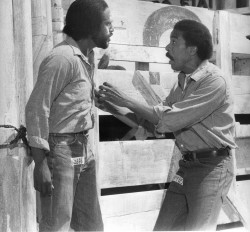 You had a hit record in the 1950’s with “Diamonds and Pearls.” What do you remember most about your Doo-wop singing days?

I mostly remember touring with James Brown and the different big city concert theatres:  The Apollo, in Harlem and the Howard in DC, and how much fun it was back then, working with such greats as Fats Domino, Jackie Wilson, and Bo Diddly. It was a great time. 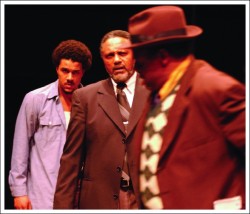 C.J. Lindsey, Charles Weldon, and Harvy Blanks in 'Jitney' in 2002 at The Denver Center Theatre Company. (Photo by Terry Shapiro).

Stir Crazy is considered a comedy classic. Do you still get recognized for playing Blade today?

It happens almost everyday still, although sometimes people won’t quite know why they recognize me.

What do you consider the greatest accomplishment of your career so far?

This question is easy, and I am not being sarcastic: ‘Being Alive Still’ there is a reason for that answer, but I would have to clear (KILL) you to answer it. 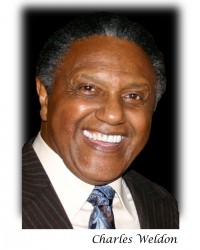 some of your favorites?

Top of the list is The Great MacDaddy, The Offering, A Soldier’s Story, and The River Niger, to name just a few.
__
Listen to Charles and The Parardons sing “Diamonds and Pearls.”

Watch an interview with Charles who talks about The Negro Ensemble Company.