‘A Quick 5’ With George Fulginiti-Shakar

Well, it was either Music Director for the Boston University Gilbert and Sullivan Society ($50??), or playing piano for singers at $3/half hour!!

Do you prefer shows where you conduct and play the piano or ones that you only conduct?

I like them both. Piano was my first instrument and I love playing, but it makes me incredibly high to conduct and have wonderful musicians who bring the music to life.  Of course, when you conduct from the piano, you better keep your neck in good shape since you do a lot of cuing using your head.

Who are some of your favorite composers for the theatre?

I love the lyrics of Rodgers and Hammerstein, and Rodgers and Hart. And I love to work with the complexity in a Sondheim score – very rewarding.

When doing a big musical like Oklahoma! in the Fichandler in the round at Arena Stage, what are some of the challenges you have that you wouldn’t gave if the show were in a proscenium space?

Where-oh-where can you stand where you know you’ll be able to cue the singers?  Nowhere is the answer. And so the challenge becomes how to read the actors emotionally so we agree on where the beat is or where the breath is. Or in a big ensemble, how to “telegraph” the cue around the stage so everyone gets to see it.

What are some of your favorite projects so far?

I just had a blast at the Shakespeare Theatre doing the concert version of The Boys from Syracuse. A whole 19 piece orchestra!  Where do you find this in these days of cutbacks? Great, lush sound with 6 (yes, 6!) violins. And gifted and talented singers as well. It was a glorious sound, and a lot of fun compressed into 2-3 weeks of intense work.

I loved Cabaret and Oklahoma! at Arena. Molly Smith is a wonderful director and each musical had great depth as well as entertainment.
__ 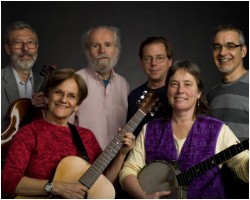 Watch Parker Esse and Music Director George Fulginiti-Shakar, both Helen Hayes Award winners for their work on Oklahoma! at Arena Stage, demonstrate some of the musical numbers and dances and changes in the arrangements made for the Arena Stage production for Northern Virginia Magazine’s Clara Ritger.

Read about George’s days with the group Bright Morning Star and see pictures of their reunion, and watch the group perform.

Watch WETA’s Around Town interview George Fulginiti-Shakar at a rehearsal at Oklahoma!

Watch highlights of Oklahoma! and listen to the orchestra George conducted at Oklahoma!