‘A Quick 5’ With Jared Gertner

Jared Gertner is currently on Broadway in this year’s Tony Award-winning Best Musical The Book of Mormon. Other credits include two years with The 25th Annual Putnam County Spelling Bee in NY, San Francisco and Boston, Peter Pan, Little Shop of Horrors at Paper Mill Playhouse, and Ordinary Days at Roundabout Theatre. While performing in The Book of Mormon, Jared is rehearsing for the Broadway-bound new musical Yank. Jared is one busy guy, and if Mormon keeps going like it is now – he is going to stay that way for a long time. 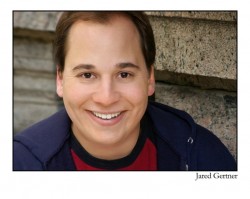 As a child growing up did you know you were going to be a performer?

I grew up in New Jersey with theatre loving parents. They started taking me to shows when I was 3 years old. I fell in love with it immediately. I did my first show at a community theatre when I was six that was it!  After that, I knew for sure that I would do this for a living. I felt very lucky to know what I wanted to do at such a young age.

I did a production of A Christmas Carol at a theatre in New Jersey when I was 13. It was a new adaptation and I played the ghost of Dickens’ childhood. It was strange, and halfway through the run they decided to try the show without my character in it.  I learned the feeling of getting cut very early on in my career!

After playing in several companies of Spelling Bee, if presented with the chance to play the show again would you do it?

I did the San Francisco sit down of Spelling Bee which became the Boston sit down seven months later.  Then I joined the Broadway company for the last year of its run. I did it in three cities, but it was all the same production and it was very special!  I think Spelling Bee is brilliant and I think that James Lapine’s production was pretty close to perfect. I feel very lucky to have spent two years of my life as a part of it. If I were going to do it again, it would have to be the perfect situation because it would be awfully hard to top the experience I had the first time. Maybe I could wait several years and then play Vice Principal Panch. That could be cool. I also think I might like to direct it sometime.

You were a lost boy in Peter Pan and went on to play Seymour in Little Shop of Horrors at Paper Mill Playhouse. How important was PMP for your career? 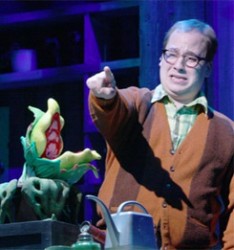 Paper Mill Playhouse was one of the most important things in my life as a teenager. I did Peter Pan there when I was 14, and I did Big River there when I was 17. Along the way I also studied at their conservatory, won their Rising Star Award for achievement in High School musicals, and was granted a scholarship from them to help me study theatre in college. I worked with incredible professionals at the Paper Mill and was able to learn, at a very early age, the kind of actor that I wanted to become. Going back and doing Little Shop of Horrors there was one of my proudest achievements.  I had just closed Spelling Bee on Broadway and got to go back to the place where I had dreamed my childhood dreams as a grown-up, working actor! I will always cherish that experience and that theatre!

What do you consider your greatest achievement thus far?

My greatest achievement is that I am a genuinely happy man with a great family, a wonderful marriage and fantastic friends. The cherry on top is that I get to make my living doing what I’ve always wanted to do. Life is good.
__ 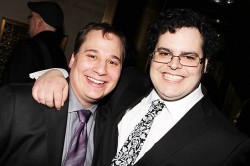 Read the article Waiting (and Waiting) in the Wings by Dick Cavett about the night Jared went in for Josh Gad in The Book of Mormon.