‘A Quick 5’ With Jennifer Mendenhall

Jennifer Mendenhall has had quite a busy year. She has performed in three shows one right after the other. Clybourne Park at Woolly Mammoth, Imagining Madoff  – and through this Sunday – After The Fall at Theater J. Other DC credits include Circle Mirror Transformation and The New Electric Ballroom at The Studio Theatre, Legacy of Light at Arena Stage, Angels in America at Forum Theatre, and The Accident at Theater J. She is a Helen Hayes and Washington Theatre Lobby Award winner, and has been a company member at Woolly Mammoth Theatre Company since 1988. Jennifer is one of DC’s most talented actresses. 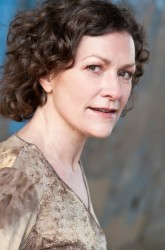 You primarily perform in the DC area, what is it about DC theatre that keeps you from going to other places in the country?

I came here straight from college and started working onstage, and just kept going. I’ve grown as an artist because I’ve had the opportunity to work – you learn so much from doing it – and I’ve worked with an amazing array of people. I have a family, two children (16 and 11, shocked – gasps), and a home I love. My husband, Michael Kramer, and I record books in the basement. So I really wouldn’t want to move. I have worked elsewhere, but rarely. Maybe when Henry and Vivian go off on their own.

This season you performed in two shows back to back at Theater J. How do you rehearse for one show while performing in another one and still keep your sanity? 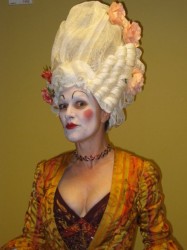 As Lady Vanity in 'Measure for Pleasure' at Woolly Mammoth Theatre Company.

Well, I don’t. But normally, you can’t tell the difference. Michael takes over all the cooking and shopping, and I owe him a huge debt of gratitude. This last run was actually three shows in a row, starting with Clybourne Park at Woolly.

After The Fall is an intense piece, what is your nightly process like to prepare yourself for it?

So interesting that you ask that. Holga is perhaps the least turbulent character in the play. So I try to clear my head and open up. I’m never really satisfied with what I’m doing onstage in this one; there’s always something I’m tweaking. And then I go drown in Mitchell’s eyes.

Have you ever wanted to direct?

Yes, and I have, many years ago, pre-children. I will try to do it again,  once my time is more my own. 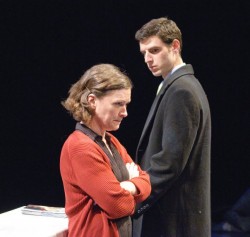 I’m going to Israel for the Isra-Drama festival in Haifa, Tel-Aviv, and Jerusalem, and staying for a while with Sinai Peter, who directed me in The Accident. Then as many readings at Theater J as they like, but no shows for a while. Three in a row is a bit much. I need to spend more time with my children. Time flies.
__
Joel Markowitz interviews Jennifer Mendenhall and Rick Foucheux about their roles in Imagining Madoff.