‘A Quick 5’ With Michael Cole

Michael Cole is personal assistant to the award-winning composer Stephen Schwartz. He is in charge of fielding requests for sheet music and all of Mr. Schwartz’s fan mail, as well as making sure all of Mr. Schwartz’s travel arrangements are made. Being a personal assistant is not an easy job. As you will see – because of a certain fan base for one particular show – his job is never boring.

How did you get hired as Stephen Schwartz’s personal assistant?

I moved to New York City to pursue my acting career and of course I needed money. My first job for Stephen was cleaning his apartment. He asked me if I could type up a letter for him, and the job grew from there. 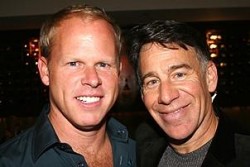 Were you interested in the arts as a kid?

If you had known me as a kid, you would be surprised to learn that I didn’t end up working on a ranch or a horse farm. I got bitten by the musical theatre bug when I played “Jesus” in – you guessed it – Godspell.

Fans of the musical Wicked are a special breed.  What is the most outrageous request you have gotten from a Wicked fan?

We once got a request from a young guy who had messed up with his girlfriend. She was a big fan of Wicked especially “Defying Gravity”  (“It gives her so much strength.”) He wanted Stephen to write to her in hopes of helping win her back.

What is your favorite Stephen Schwartz composition?

Favorite musical: Children of Eden. Why? Because of its universal messages, emotional music and storytelling. I always feel I’ve been on a journey when I see a good production of that show.

Favorite song: Forgiveness’ Embrace. Why? Because it is a couple of years worth of therapy encapsulated into a four minute song (“But there’s an alchemy in time/Transforms each grief and loss and scar/Into the precious stuff of who we are”)

What do you find to be the most rewarding thing about your job?

I’ve always been a good “assistant” – a skill I learned working with my dad. I’d always try to be a step or two ahead and have the appropriate tool ready. Being in a supportive role is something that I find very rewarding, especially for someone who appreciates the support as much as Stephen does.