‘A Quick 5’ With Michael Kahn

Michael Kahn is the Artistic Director and driving force behind Shakespeare Theatre Company, and is celebrating his 25th season at STC. His directing credits read like a list of the classics – everything from Harold Pinter’s Old Times to Shakespeare’s Richard ll. He directed a revival of Showboat on Broadway that toured the country with Donald O’ Connor as Cap’n Andy. Other New York credits include Whodunit, Here’s Where I Belong, and Cat on a Hot Tin Roof. He has taught at Julliard, NYU, and Circle in The Square Theatre School, and of course at Shakespeare Theatre Company Academy for Classical Acting. Michael has also directed at many of the nation’s top regional theatres including American Shakespeare Theatre and McCarter Theatre Center, where he also served as their Artistic Director. Thanks to Michael for his artistry and vision. 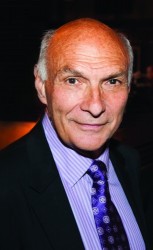 It was a summer stock production of Once Upon A Mattress at The Sharon Playhouse in Sharon, Connecticut. On Opening Night, the electricity in the town went out, so we all held flashlights on

the actors for the audience to see. I noticed that the feet of the actors were also lit and realized that light was coming from the choreographer.

You directed a revival of Showboat with Donald O’Conner on Broadway in the 1980’s. Have you directed any other musicals and would you consider directing one for STC?

I have directed several operas since Showboat and if I found the right musical theatre piece that I would want to do with the Shakespeare Theatre Company, of course I would love to direct that here in D.C.

What suggestions do you have for other Artistic Directors who are looking for ways to fill up their theatres during these tough economic times?

First of all, you must stick to your vision. And also stick to what the theatre means to you and your audience. Then you need to be able to do more with less, which causes you to get extremely creative. Another option is to find other uses for the theatre during times that you are not producing. 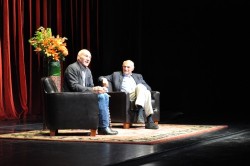 Some very famous actors have performed Shakespeare – Olivier, Gielgud, Burton, and Branagh are just a few. Who do you feel is the best interpreter of Shakespeare’s work?

We are very fortunate to have in the U.S. such great interpreters of Shakespeare like Stacy Keach, Kevin Kline, Michael Hayden, and Richard Easton. We also have a great crop of young actors who have been trained in this work and are excited to do it.

How do we keep the younger generation interested in the classics?

I believe it is important to excite young people about classic plays and have them attend performances first, before they study the text in school. In the schools, they need to approach the classics as a living theatre of character and ideas rather than spending a lot of time on trying to dissect the text. And it is important for theatres to make their work accessible to the younger generation through attendance and through all of the new media available today.

Michael Kahn talks about The Heir Apparent, which he directed in September and October 2011, during Shakespeare Theatre Company’s 25th season.

Watch a scene from The Heir Apparent.

Artistic Director Michael Kahn discusses his vision and excitement for the 2011-2012 Season, which coincides with his 25th Anniversary with STC.