‘A Quick 5’ With Toni Rae Brotons

Toni Rae Brotons is currently directing Carol’s Christmas for Pinky Swear Productions. As an actress – she has been seen at Imagination Stage in Mulan, Taffety Punk in Romeo and Juliet, Willy Wonka at The Kennedy Center and One Good Marriage at MetroStage. It is a pleasure to be working with Ms. Brotons on Carol’s Christmas as her Stage Manager. 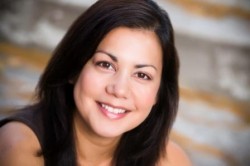 I was an Acting Intern at Hope Summer Repertory Theatre in Holland, MI. I had small roles in Romeo & Juliet and Anything Goes, and I also played Chiffon in Little Shop of Horrors and travelled with their children’s theatre troupe. Interns had to participate in strike but we also got to take classes from some amazing teachers (J. Allen Suddeth comes to mind). It was a great experience!

What brought you to the DC area?

I was in Cincinnati and wanted to try to find theatre work in a bigger market. I wanted to move to New York, but the person I was moving with didn’t want to live there, so we compromised and went to DC.

Which do you like to perform in more, plays or musicals? 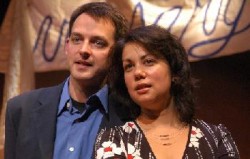 I really don’t have a preference! Each production is unique, exciting and rewarding in its own way. The next show I’m performing in is a play with music, so I get the best of both worlds.

You are directing Carol’s Christmas for Pinky Swear Productions. Do you find directing a rewarding experience?

I do. I like the ‘big picture’ perspective you get with directing, and the idea of leading a team of artists to take words on a page and bring them to life is pretty exciting to me.

What are some of your favorite productions you have starred in or directed? 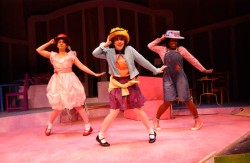 Cabaret in grad school comes to mind – I was Sally Bowles; directing Measure for Measure for the Cincinnati Shakespeare Festival; performing in the Day Old Plays with Cherry Red Productions – a very unique experience – and playing Steph in One Good Marriage for MetroStage. Also, any time I work with Imagination Stage or Taffety Punk Theatre Company I am loving life