You’ll discover some rare gems in the junk shop of Centerstage’s production of David Mamet’s American Buffalo. Directed by Liesl Tommy, American Buffalo is a tale of capitalism, strife, friendship, and trust. Set in the 1970s – the show takes place inside Don’s resale shop on the north side of Chicago. As the story unfolds, we meet Don (William Hill) the shop owner, Bob (Rusty Ross) his novice-like apprentice, and Teach (Jordan Lage) – a guy with a nose for business. A plot evolves for the unlikely trio to swipe a rare coin collection, but as things go awry – we become witness to mounting tensions and the ruthlessness of mankind. 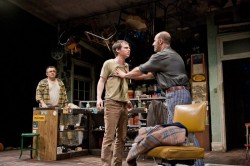 Working in tandem with Lighting Designer Lap Chi Chu, the pair utilize low-hanging fluorescent bulbs that glow brighter than necessary to illuminate the shop with a sleazy feeling. Lap Chi Chu uses rotating blue lights angled high in the back of the stage to filter through a glass skylight often creating the illusion of night time and rain, making a brilliant atmosphere for the players to work in.

While the actors created unforgettable performances – I question Tommy’s direction in regards to the various junk and sundries. Many times, Teach (Jordan Lage) picked up a prop – a toilet brush, canteen, boning rod, and he seemed to do so without any purpose other than the fact that the prop was available – the temptation of so many different props being a bit overwhelming. It also happened early in the show when Teach (Lage) and Don (William Hill) were wandering aimless through the shop as they shared lines, and again when Don (Hill) and Bob (Ross) were clearing up the space. They moved boxes and objects from one place to another without any real purpose – as the items were never put away or really taken out, and were just moved for the sake of being moved. They shambled about when they could have utilized the two chairs or counter-spaces that were provided for them.

Tommy’s intention of creating unique characters through the actor’s portrayal of energy, however, was genius. Tommy uses three different levels of energy – a soft loose energy assigned to Bobby (Rusty Ross), where his character is floating in and out of scenes and almost in and out of reality as he moves around the shop and back out the door. Don (Hill) was given a grounded firm energy quality to work with, where every line had intent behind it. When Hill is set to the task of polishing a particular trinket he buffs his hands around the metal in a natural fashion, really concentrating on the task at hand. And Teach (Lage) is given the dynamic rapid-pace energy; a man who cannot sit still. Watching these three qualities play out harmoniously among the actors – each one bouncing off the other creating echoes of reactions is a brilliant choice created by the director.

Bob (Rusty Ross) is presented as a subdued character. He says a little but his reactions are key to his strange character. Ross executes his facial expressions with precision, responding with confused looks or worried furrowed brows after taking a moment to absorb what is being said. His physicality is mildly twitchy, displaying an underlying fear or nervousness that would be otherwise lost in his speech.

Don (William Hill) is a grounded character. He does not mix words but also shows compassion and Hill’s performance easily mixes these qualities without struggling over which should dominate. Hill has a distinctive character choice of reaching in his pants pocket and jingling his loose change every time he steps away in pensive thought or begins to feel uncertain. He lets his voice do the talking, accentuating key words and keeping his physical gestures to a minimum. It creates a strong character without needing all the heavy gestures we see in Lage’s character.

But Teach (Jordan Lage) wouldn’t be as entertaining to watch – if he wasn’t zipping and zinging wildly across the stage like a frantic caged animal desperately plotting escape. Lage is throwing himself over counter, scooting quickly back and forth with an anxious energy that explodes mostly through his arms – as he waves them frantically to reiterate his points throughout the performance.

These three performers have beautiful stage chemistry, each responding in turn to words being spoken or things being moved about. It was amazing to watch three completely different characters come cohesively together as one in this performance.

So dig out your old coins and turn them in to pay for a ticket to see American Buffalo at Center Stage.