Maryland Ensemble Theatre’s production of David Mamet’s American Buffalo offers a unique perspective on ambition, ethics, and loyalty. Although it was written in 1975, this work personifies the middle class struggle to catch a break – which is still just as it is so elevant today as our country ponders the recent ‘Occupy‘ movement, theory and antics. Notice to the faint of heart: this dark comedy does not shy away from foul language as the dialog is fast, raw, and real. Maryland Ensemble Theatre’s production captures Mamet’s fast dialog and colorful language.

Donny, portrayed by MET’s Artistic Director Tad Janes, is a shopkeeper who feels ripped off by a coin collector who bought a Buffalo Nickel for $90. He feels the coin was worth five times that amount or more, so he sets out to reclaim it. Donny plans the heist at first with the inexperienced and nervous Bobby (Clayton Myers), who he mentors. Teach is more experienced, streetwise and cocky than Bobby. All three of the characters want to improve their places in life instead of continuing to deal with their current struggles. Friendships, trusts, and loyalties all get tested along the way.

Peter Wray directs a fantastic trio of experienced actors. In the small performance space, his cast invades your space and you can’t escape them or their powerful performances. Tad and Clayton have worked together several times and the chemistry they share in their scenes is wonderful to watch, especially when Bobby tries to sell the nickel to Donny during the second act. Clayton is talented at displaying the character’s bumbles, anxiety, and emotions. Jeff Keilholtz’s Teach is cocky, belittling at times, and a bit of a smart a*s. The audience roared when Donny was telling him about a girl he saw the other day, and Teach was shaking his rear like he was the girl being described. Teach belittles Bobby quite a bit when he is convincing Donny to use him for the heist.

Set Designer Ira Domser does a remarkable job of turning the stage into a realistic junk store. Domser’s set has the audience looking in right in the middle of the store where the play takes place. It looks so real that several audience members walked up to the set at intermission to see if it was really a junk store. 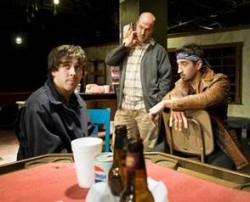 Although American Buffalo will make you laugh at times, it will also surprise you and shock you. You’ll enjoy watching these three talented actors fight and and insult each other and scheme while trying to pull off this unwise heist. You’ll even care about these shallow characters, and that’s due to the powerful performances and Peter Wray’s excellent direction. Don’t miss it!