The sun will come out over Charm City as Toby’s Dinner Theatre of Baltimore presents the classic tale of Annie. Directed by Shawn Kettering with musical direction by Douglas Lawler, this charming tale of little orphan Annie and her struggle to escape the wretched clutches of Miss Hannigan’s orphanage – is the perfect family outing for the holiday season. Following the iconic red-headed orphan as she tries to escape into the city to find her real parents, the audience is treated to a delightful band of characters and scenes from the motherly Grace Farrell at the Warbucks’ mansion to Bert Healy, radio personnel extraordinaire, in the recording studio. With fond musical numbers, a brilliant ensemble of adults, and bright-eyed energetic children, the show is the perfect blend of laughs and good feelings for everyone in attendance. 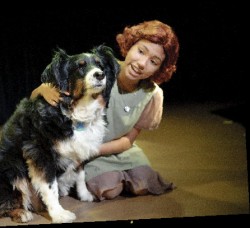 Theatre goers are treated to a wonderful array of costumes, designed by Samn Huffer. The orphans are outfitted in bedraggled rags and the Hooverville homeless are equally as tattered in their threadbare overcoats and holey sweaters. Huffer uses these down-trodden costumes to create a sense of The Great Depression in 1933 present in the slums of New York City. But then we are presented with the wealthy Warbucks’ mansion outfits. We see fur-trimmed coats, sharp pressed suits, and snappy crisp maid uniforms. Warbucks’ wait staff is outfitted in varying shades of emerald during the scene in preparation for Annie’s adoption party, complete with a dashing turquoise evening gown on Grace. Huffer’s efforts are well appreciated in distinguishing the rich from the impoverished throughout the show.

Several moments are uniquely highlighted throughout the scenes with clever lighting design, crafted by David A. Hopkins. The opening scene in the orphanage is bathed in subdued blue lighting to indicate twilight; creating a tender moment on stage as Annie (Adalia Jimenez) sings a comforting solo number, “Maybe.” Hopkins’ use of strobe lights when the police swoop onto the scene in the streets of New York creates a spastic state of chaos, allowing for the actors to flee without having to scream or flail to cause confusion. Red and purple lights slink through the atmosphere in Hannigan’s office during “Easy Street” to really enhance the feeling of dirty dealing and wrong-doing, highlighting the performers in an almost demonic shadow of colors.

With a peppy group of orphans (Grace Dillon, Cristen Hall, Natalya Jimenez, Hunter Lubawski, Lily Ulman, and Maddie Ulman) we see some wonderful choreography amongst the ranks during the number “Hard Knock Life.” Choreographed by Tina DeSimone, the girls slap their wash pales and sponges to a fierce beat, and they shake their fannies in time with the rhythm for a fun, upbeat dance number. DeSimone’s work is also beautifully executed amongst the adult ensemble (Erin Donovan, Matthew Greenfield, Katie Heidbreder, Alan Hoffman, Sarah Manna, Chris Rudy, Dan Sonntag, Dan Van Why, and Victoria Winter) during the large group number “Hooverville.” They also work brilliantly together as they decorate the Warbucks’ mansion during the Christmas scene, transforming it from a simple mansion to a Christmas wonderland ready for Annie. Keep your eyes peeled for scene stealer, Chris Rudy, who will wow you with his physical and facial expressions during these large ensemble numbers. 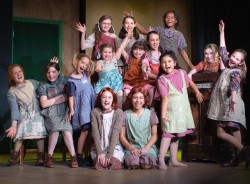 The Orphans of ‘Annie.’ Photo by Kirstine Christiansen.

The creative choice to cast Annie (Adalia Jimenez) as a slightly older girl is played out well in her interactive scenes with the younger orphans, especially Molly (Lily Ulman) the orphan with nightmares. Jimenez plays her character with a motherly air as she tucks the children into bed after waking them, but shifts easily into the innocent young orphan who believes in hope and optimism. She is very upbeat and consistently smiling, except for when she’s frowning, which is shown with heartfelt disappointment in the girl’s face. With a powerful voice she can be heard clearly in all of her songs, especially her solo performance of “Tomorrow.” Such an incredibly full-supported voice may not have been found in a younger actor, further justifying the choice to cast Jimenez.

Stealing the spotlight in several orphan scenes is little Molly (Lily Ulman). Ulman, who is making her Toby’s debut, wows the crowd again and again with her priceless mimicry of Miss Hannigan (Tina DeSimone) and her adorable pouts and giggles. DeSimone provides equally hilarious mimicry right back, mocking the girls in a high falsetto and squeaking just like the orphans in their protest. With just the right level of drunken sway to her stagger and inebriated slur to her speech, DeSimone provides a hilarious interpretation of the character without being too mean or too silly. She provides perfection in her not-so-subtle attempts to veil her drunkenness, laughing off her flask as ‘medicine.’ And she receives a standing ovation when she performs the well-known solo, “Little Girls.”

Playing opposite of DeSimone is the talented Heather Marie Beck, breathing a sophisticated air into the character of Grace Farrell. Beck presents the character with perfect posture and diction, very defining of her wealthy lifestyle. But when presented with Annie (Adalia Jimenez) she lends her character more toward a concerned and motherly woman. Beck and DeSimone have brilliant bickering chemistry flowing as an undercurrent in their exchanges, masked politely in their conversations. Beck provides a soothing sweet but crystal clear voice when singing “I Think I’m Gonna Like It Here” and tends to Annie (Jimenez) in this number with nurturing and caring facial features that gives her a very motherly quality. Matthew Schleigh and Debra Buonaccorsi  – who play the slimy yet hilarious Rooster and Lily St. Regis – join DeSimone in a rollickingly funny “Easy Street.”

And there is brilliant chemistry to be found as Jimenez, Beck and David Bosley-Reynolds, as Warbucks, come together in the musical number “N.Y.C.” The trio harmoniously sing and dance their way through the audience as they stroll the 45 blocks to the Roxie, and they create a vibrant family feeling amongst each other, keeping close physical contact with beautiful smiles. The scene stealer here comes from a beautiful belting star-to-be (Katie Heidbreder). She has one verse but sings with gusto and passion, a glittering hopeful look in her eyes as she sings. Heidbreder can be heard clearly and loudly as she belts her verse with confidence, a true scene-stealing moment

Bosley-Reynolds presents a brilliant portrayal of Warbucks, showing a range of emotions and physicality to express the growth of the character. When first presented with the orphan girl, he is cold and awkward, unsure of how to act around her, even going so far as to physically avoid her in his uncertainty. But as he grows fonder of Annie, he radiates hearty warmth that melts across the stage and through the audience. With vibrant eyes and a wildly expressive face, Bosley-Reynolds shares with the audience a compassionate Warbucks with a gifted voice that floats melodiously through his musical numbers, especially “I Don’t Need Anything But You.” 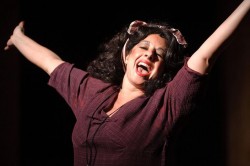 And be on the lookout for one final scene-stealer! Drake (Andrew Horn) is simply the household butler, the leader of the servants, but is an absolute delight to watch. He speaks with precise execution while providing hilarity in his movements, especially when he steps over one of the orphan girls on his way back and forth to answer the door, as if she wasn’t there.

So for a fantastic family feeling, the silver lining of the holiday season; be sure to check out Toby’s Dinner Theatre of Baltimore’s presentation of Annie.