If you are looking for a family friendly outing to get you in the holiday spirit, look no further than Way Off Broadway’s original Christmas presentation, Christmas Tidings. The moment you come through the door of this cozy dinner theater that seats about 90, you feel as though you’ve arrived at a family gathering and in actuality, you have. The Kiska family has been hosting this party since 2002. Talented family members can be found selling tickets in the box office, serving drinks, acting, directing, and even writing their productions themselves. Such is the case for Christmas Tidings, a delightfully lighthearted and simple tale of Christmas magic for all ages, written and directed by Justin Kiska. 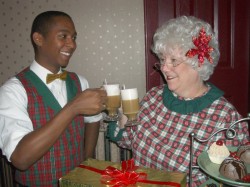 Jordan C. Allen as Rusty and Deb Kiska as Mrs. K in ‘Christmas Tidings.’ Photo courtesy of Way Off Broadway..

In a gift store called Goody’s Bavarian Christmas Card and Gift Shoppe, we meet sales clerk Rusty (Jordan C. Allen) and his boss, Mrs. K (Deb Kiska). Along with them we witness a crazy cast of holiday shoppers searching for something, the perfect holiday card, treats to enjoy with their family, and those just milling about to enjoy the experience of the season. Goody’s serves up not only the best in holiday wares, but a little Christmas magic for everyone, as well.

The show is formatted in a series of skits that allow each group of characters to share some great Christmas karaoke-like moments to tell their stories. Each scene has its own delightfully kitschy charm, but two or three in particular involve some hilarious over-the-top comedy that absolutely steals the show. Imagine a Saturday Night Live mash-up with Sesame Street. Children and adults alike were in stitches!

The actors do a great job of sharing the spotlight, as each gives an energetic and spirited performance. It is easy to see that they are comfortable together and having as much fun as the spectators. Particularly outstanding are Jonny Kigin and Jordan B. Stocksdale who gave fantastic comedic performances. Vocally, Jordan C. Allen is a highlight, with his pleasing high tenor range and natural stage presence. Susan Thornton does a nice job of staying in character while belting out her songs. With the generous amount of tracked Christmas standards sprinkled throughout, and lovely harmonizing by the performers, you’ll want to sing along. 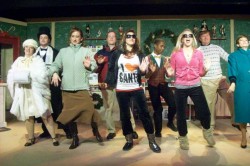 The cast of ‘Christmas Tidings.’ Photo courtesy of Way Off Broadway.

The well-detailed and festive set, constructed by Bill Kiska and Jordan B. Stocksdale, remains constant throughout each scene, with one very creative surprise that literally has the audience howling with laughter. Costuming (Bill Kiska, Susan Thornton) is well thought out and adds to the characterizations nicely. Choreography (Bill Kiska, Jaimie Hoover) is understated when simply complimenting a scene, but appropriately sassy when adding to the comedy.

Justin Kiska’s writing and direction is streamlined and packed with fun sassy dialog. This production is tight and well directed, with no lull in the action. Each skit and its well incorporated song (s) hits home with its intended purpose, whether it is a touching reminder of the true meaning of Christmas, a finger wag at materialism, or just there to make the audience laugh. The clever ending warms the heart and ends on the perfect note.

Christmas Tidings is a show with humor and heart about a special place, which also describes the Way Off Broadway Dinner Theatre itself. Think of the show as a wonderful gift from the Kiska family (and company) to yours. To second the quote from Rusty, which he says after taking in some particularly outrageous shoppers, “A little bit crazy, but that was fun!”

Christmas Tidings plays through December 30, 2011, at Way Off Broadway Dinner Theatre and Children’s Theatre – 5 Willowdale Drive, in Willowtree Plaza, in Frederick, MD. To make a reservation call the box office (301) 662-6600.