Fundraising With a Mission: Julia Harman Cain and Michael Dove on Presenting ‘The Normal Heart’ at Forum Theatre on Monday, November 7, 2011 at 7:30 PM

We at Forum are extremely excited to present a very special presentation of The Normal Heart this Monday, November 7, 2011, at 7:30 PM. We are thrilled, in part, because it features one of the most amazingly-talented casts we have ever heard of: Will Gartshore, Holly Twyford, Mitchell Hébert, J. Fred Shiffman, Mitchell Hebert, and several others gracing our stage. We consider ourselves lucky to even get to be in the audience for this performance!

But, for the purposes of this post, we want to talk about another aspect of this event that has us at Forum so excited: fundraising with a mission.

As a youngish theatre company of eight years, we have often fallen into the trappings of “doing things the way everyone else does it.” From not knowing any better but to start producing a 3-show season from the get-go to hosting fundraising events that bore a striking resemblance to every other benefit evening around town, we’ve had to learn how to make this theatre our own, over time. Hopefully, companies evolve as they grow, and it’s always been our mantra to “question everything” and to never accept any idea or practice at face value. To always strive for authenticity and to never settle for business as usual.

This drive to reinvent, constantly has found its way into every part of Forum. It has of course affected our programming as we’ve strived to only choose shows that challenge our audience and ourselves as artists. We have even abandoned the traditional subscription model for a membership program that we feel builds a more meaningful relationship with our audience.

This past year, we underwent our first “strategic planning” session to reassess the various departments and goals of the theatre. When it came time to discuss our fundraising efforts, we quickly realized that were merely following what everyone before us had done and had never questioned if there was a better way. We threw fairly traditional parties with silent auctions and passed appetizers and had a grand time, but there was always a feeling that it could mean more. That it shouldn’t just be an event to ask for money. We wondered if there was a way that was more connected to who we were as a theatre and what we believed most.

The debate resulted in the conclusion that even our fundraising events had to be extensions of our artistic programming and our mission.

That’s when we decided that the best way to achieve this was to create the most special and unique to Forum event possible. An event unlike anything else in DC. We decided to present a remarkable play, The Normal Heart – a play with a powerful and relevant message – with the most remarkable cast of DC actors possible for a one-night-only performance of a lifetime. 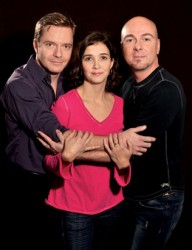 Cast of 'The Normal Heart': Will Gartshore, Rick Hammerly and Holly Twyford from Metro Weekly on November 3, 2011. Photo by Todd Franson.

We asked Jeremy Skidmore, who so wonderfully and skillfully staged our production of Angels in America: Millennium, to take a break from his directing hiatus and gather a “dream team” of actors to bring this powerful portrayal of the AIDS crisis in the gay community of the early 1980’s to life.

It is sure to be an unforgettable evening as the play has never been produced in the DC area despite it being such a culturally influential story and one of theatre’s most powerful statements.

Please consider joining us on Monday for The Normal Heart and help support a theatre that will always be dedicated to asking big questions and telling important, relevant stories that deserve to be heard.

Read Chris Geidner’s An Angry Heart in Metro Weekly on November 13, 2011, where he interviews playwright Larry Kramer on The Normal Heart.