Theatre Kibbitz: Heather McDonald on Writing and Directing ‘STAY’ at Theater of the First Amendment

The world premiere of Theater of the First Amendment‘s STAY – conceived by Heather McDonald and Susan Shields, choreographed by Susan Shields with SLAM Projection Animation by Gregory Crane – is about to open this Friday, November 11, 2011, at Lansburgh Theatre. 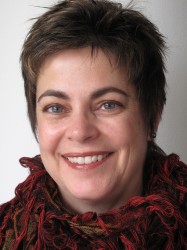 In the first of two articles, Heather McDonald, who wrote and is directing STAY, talks about her journey with the show.

“Two years ago, Susan and I met at The Wine House to talk about life, motherhood, creative ebbs and flows, loss, children, husbands, and what things were most on our minds and nagging at our souls. We found a lot in common. The tricky part of balancing motherhood with a creative life with a real job at George Mason where we are both tenured full professors. We found certain themes kept coming up for both of us. The ways in which loss defines us and then what people do after catastrophe. That has always interested me a lot.

I remember once hearing Marsha Norman talk about the difference between men’s plays and women’s plays. This is likely a horrible generalization, but here goes … that in most plays, the climax is somewhere about 3/4 of the way through the play and in many woman’s plays, the ‘climax’ happened before the play began and the play is about what people do to clean up the mess, how they move on, what those relationships do to transform and incorporate loss and catastrophe.

STAY is a lot about how much we long for people and moments to hold. To have a lover or a husband stay, to have a child stay in that golden part of childhood, to have someone who is lost to themselves stay in their best part of themselves, and then also give way to the fact that all is flux and shifting and changing and that it must. Tehre’s a Buddhist saying I’ve used in the piece that says, In the present moment, you may even transform the past.

The initial process was finding times to meet and look at each other’s work, listen to music, look at this big box of images I’ve collected over 30 years, and start to think of bits of text, bits of movement. We chose music and images we both responded to as springboards for beginning work. Pretty quickly I realized we needed a workshop, time in a studio with dancers and actors to just see what we could build. 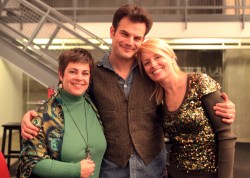 That’s where TFA and CCT (Center for Consciousness and Transformation) came into play. TFA offered support and time and space in their First Light development process and CCT gave us a grant of $35,000 that allowed us to pay for the artists’ time, bring Greg Crane from San Francisco, pay for music rights etc. The first workshop we had Greg there, 4 actors, 4 dancers. We went into a room with nothing on paper. Susan had worked on two dances ahead of time and I’d written bits and pieces, but that was all. We asked artists we knew who would trust us and just say, ‘yes,’ I will come and play for a week.

I’d been to Scotland several times and walked The West Highland Way for my 50th birthday, and spent the rest of that trip exploring the islands of the Hebrides. I’d been writing a bit about that. So, I brought stones and chairs and suitcases in for us to play with and said, I think we’re on an island.

Out of that first workshop, we found a way of working, we found a bit of a world and a story and who these people were on this island. That’s a lot.

It’s an exhilarating and brave way to work. Because you’re naked in your process. The actors have felt this as we move toward production. A kind of raw vulnerability in their performances. And everyone is being asked to work outside of their comfort zone.

Recently, I went to hear someone speak at GMU’s Center for Conflict Resolution and he was talking about how all the ills of the world and conflicts come largely from tribal issues. It struck me that the issues we’ve had in this entire process have come out of the two tribes: theatre and dance. That when we are fearful and feeling our own way of working isn’t being respected, we retreat to those tribes. Boundaries go up. And we’ve had some bumps along the way. But what is gratifying to me this week in the theatre at The Lansburgh is how it all feels like one big company.

I look up and see Naomi coaching Laura vocally, Aaron helping Naomi with a movement section, Michael, Scott and John all laughing about their bar scene. The actor/dancer lines have blurred and they’re just a group of artists in a project now.

I think relationships of any sort are always complicated and ones of any depth are mysterious and difficult and beautiful. Creative collaboration is like a marriage. With all the falling in love part and then thinking, wait a minute, you don’t get me at all, and then moving toward a deeper way of working. 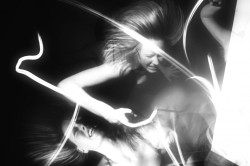 A still image from part of Gregory Crane’s projection design. Photo is of dancer Kalynn Marin. Photo by Gregory Crane).

I have so many favorite and moving moments. When we got to do the workshop at Woolly Mammoth last year and I saw the size and scope of Greg’s slams and what that did to the whole of the piece as far as making it fuller, bigger, more emotional.  Seeing the beautiful ‘acting’ done by dancers in wrenching scenes. The laughter of the men in the bar scenes. So many generous moments of actors and dancers crossing disciplines and doing something extraordinary.

But I think my very favorite moment was when my younger daughter, Marilyn, came to see a run-through and turned to me with tears in her eyes and said, “Mom, wow. WOW!”