Inspecting Carol, produced by The Sandy Spring Theatre Group, is a delightful romp, a perfect antidote to the gloom of lengthening nights and the frazzlement of approaching holidays. The farce built around Charles Dickens’ revered work A Christmas Carol, the play, Inspecting Carol by Daniel Sullivan, is surprisingly fresh and funny. Inspecting Carol lampoons the artistic compromises made by funds-hungry theaters, but the lampooning is gentle, and the humor – variously verbal, physical, and situational – is the play’s real point. It is effective. Nowhere else will you see in Scrooge’s graveyard Raggedy Ann and Raggedy Andy, rising, or a turkey dropping from a ghost’s cloak. 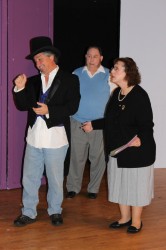 A regional theater company, newly bankrupt, has given itself four days to rehearse its greatest draw of the year, an adaption of A Christmas Carol.  Problem actor Larry (Dino Cappa), a founding member of the company given to inventing lines, often in Spanish, as a political protest, teams up with a new arrival to the theater, actor wannabee Wayne, to revise the tired adaptation. The company goes along with the duo’s absurd revisions, believing Wayne is an undercover inspector from the National Endowment for the Arts, which has recently cancelled their grant, pending an artistic review. The result is a hilarious retelling of parts of Dicken’s time-honored work, mixed with a good bit of slapstick.

The roles are well cast, and the quality of the acting is generally very good.  Particular standouts are Susan Aaron Ostrinksy (Colleen), Judy Mayer (Dorothy), Veronica Lee Johnston (MJ), and Ken Kemp (Wayne). BJ Bergman Angstadt does a fine job as Zorah Block. Although as a farce the play has room for over-the-top acting, director Frank DeSando could have allowed for more subtlety, particularly in regards to Zorah. Still, his decisions for the most part serve the play’s humor well.

To get to the play, programming your GPS is not enough. Rosborough Theater, a large, well-appointed venue, is hidden away inside the gated community of Asbury Methodist Village, and the entrance to the village is on Odendhal Avenue. The play is well worth the hunt; a comedy that has audience members helpless with laughter, tears rolling down cheeks, is a rare find.

Inspecting Carol plays through November 20, 2011, at The Sandy Spring Theatre Group at Rosborough Theater at Asbury Methodist Village,  – 409 Russell Avenue, in Gaithersburg, MD.  Purchase tickets here or at the door.