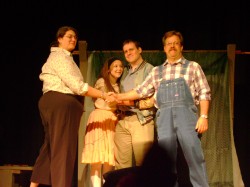 What drew you to The Fantasticks?

RTP kept asking me to direct, but when I direct I commit I eat, sleep & breathe the show, so I don’t accept unless it’s a show I have a VISION for, since it takes over my life. I had seen The Fantasticks as a teenager and performed in it later. This show is an allegory for a life passage from innocence to maturity, seeing what is important in life, that we all pass through. All teens long for adventure and to see the world, but most people find happiness in their own backyard. The show is not divided into scenes; Act I flows as one piece until the simple ‘Happy Ending.’

In Act II, like the second act of Into the Woods later, we find the ‘Happy Ending’ isn’t the ending, or even happy.

What is your connection with Reisterstown Theatre Project?

I belong to several theater groups. My friends from Liberty Showcase Theatre, Bob and June Frank, decided to bring theater to the Reisterstown area and founded RTP about three years ago & asked me to help.

We didn’t get a horde of auditioners – this show is not performed that often and therefore not as well known – which is a good reason to produce it. The auditioners we did get were very talented and I am proud of this cast.

How was your audition process?

We didn’t get a horde of auditioners – this show is not performed that often and therefore not as well known- which is a good reason to produce it. The auditioners we did get were very talented and I am proud of this cast.

What are some of the greatest challenges you have faced with this production, and how have you overcome them?

The music is not well known (except for  maybe “Plant a Radish”) and it is not easy to learn, so most actors don’t already know the melodies. Our Music Director, Lynn Graham, did a fantastic job of teaching this music to our cast. There are some lovely romantic melodies sung by the young couple (“You Are Love, They Were You”), some dark dramatic songs (“I Can See It/Beyond That Road”) and some comic vaudeville ones (“Plant a Radish, Never Say No”). The auditorium lighting is a new wireless system, and the technician is still perfecting it. 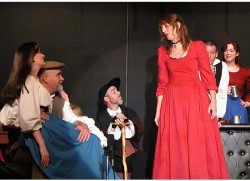 Every production is different in live theater; each cast imbues the characters with some of their own mannerisms. We have cast Luisa’s “father” as a mother instead, to use more women in the show. We have an El Gallo who actually is Spanish. We also cast two Mutes instead of one as called for. The Mutes are pantomimes, used as onstage stage managers, and also as a kind of “Greek chorus” commenting on the action in pantomime, and occasionally joining in as characters. The relationship between the Mutes (one young & playful, one older and serious who pulls him back) developed into a wonderful part of the show. I gave them each a persona but they developed a lot of what their characters do themselves, and they are delightful. (Michael also plays the Percussion parts).

Introduce us to your cast.

El Gallo is played by Daniel Douek. I had seen him onstage at Silhouette and Shakespeare, but we had never worked together. He really captures the spirit of El Gallo.

Luisa: Meghan Sova. She is only 17 and very sweet voice – her first leading role. I had worked with her in Ragtime at LST when she was a child, but she is definitely growing into a great actress, and she is the perfect age for Luisa.

Matt: Mark Care. I directed him in Kiss Me Kate for Miracle Players. He doesn’t’ have much experience, but is a quick study and very excited by this role.

Bell: Liz Kanner. I met Liz doing Jekyll & Hyde last year, and have seen her in Chicago, Blood Brothers, at Silhouette. She has a wonderful voice, very intelligent and talented and is a delight to work with. Her mother made The Fantasticks drape.

Huck: Rick Arnold. I also met him in Ragtime as LST. He has a great booming voice and comic character.

Henry: David O’Brien. I have worked with and directed him many times. Bombast is his specialty.

Mortimer: John Spears. I have directed John in Guys & Dolls, but didn’t know he was such a comedian. Mort is a very physical role.

Mutes: LouAnn Tasony. I have worked with LouAnn many times, both as an actress and as my Stage Manager, but she is so creative in this role, and Michael Sova. Meghan’s younger brother. He is charming & funny as the playful mute. He also plays percussion. We were both in Liberty Showcase Theatre’s Cinderella last summer. He’ll make a good Matt in another couple of years.

Lynn Graham is the Music Director. I have worked with her as 2nd keyboard on synthesizer at St. Gabriel Miracle Players, but never Music Director. She has worked extra hours to teach this music.

What would you like the audience to take away from your production of The Fantasticks?

A forgiving understanding of why people are compelled to do things: teenagers always want adventure, adults want security. Everyone wants love.

Tell us about your background in theater. 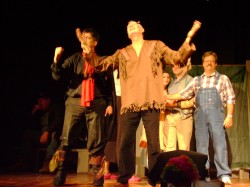 I hold a Bachelor of Music degree, have sung in New Orleans Opera, Tampa Opera, and many Symphony Choruses (Cleveland and Baltimore) and have been learning theater by doing it for many years, plays and musicals. I’ve been doing theater all my life. I have to cut my bio to fit in the program. Favorite roles: Nancy  in Oliver (twice), Jenny Diver in Three Penny Opera, Joanne in Company, Abigail Adams in 1776, Sheila in Chorus Line, Baroness Elsa in Sound of Music (3 times!), Diana Nichols in London Suite, Queen Margaret in Richard III, Charlotte Hays in Moon Over Buffalo, Stepmother Into the Woods, several Neil Simon plays. My favorite Opera performance is Carmen – cigarette girl, which I have played twice. Turandot – silencio chorus (twice) and Amahl.

What other shows have you directed?

I have directed Brigadoon (twice) My Fair Lady, Camelot (Lerner & Loewe- such great music!), Annie, Kiss Me Kate, Guys & Dolls, The King & I, Sound of Music, Annie Get Your Gun, That Was No Lady, California Suite, and Madrigal Dinner shows.

What is next for you in the theater?

I usually direct for Miracle Players in the spring, and/or audition for Company at Silhouette (I played Joanne 2 years ago for Laurel) I also sing alto in a professional a capella caroling quartet in December, and cantor at churches professionally.