Let’s Hear It for the Boys: Jersey Boys Soars Again at National Theatre

Before there was Jersey Shore, there were the original Jersey Boys – The Four Seasons – led by the incomparable Frankie Valli. Jersey Boys, currently being performed in an excellent touring production at the National Theatre, is the story of the rise to fame of this venerated 1960’s pop group, made up of Frankie Valli, Bob Gaudio (first known for his pop hit “Short Shorts”), Tommy DeVito, and Nick Massi. 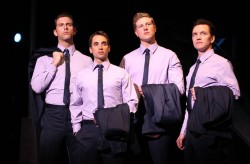 In Jersey Boys, we learn how the four guys slowly came together as pop group (first under the name “The Four Lovers”) with Frankie Valli’s unique falsetto sound in tow, how they achieved a long string of pop chart success (starting with “Sherry”, whose origins make for one of highpoints in the show) and how they all fare post- breakup.

A 2006 Tony Winner for Best Musical, Jersey Boys’ excellent book by Marshall Brickman and Rick Elice distinguishes it from other jukebox musicals who never fared as well as Jersey Boys. The story does not merely facilitate singing of the Four Seasons (and Valli’s later solo) catalogue of pop hits, but rather the songs are worked into a very strong biographical narrative. he show’s superlative book is broken up into the “four seasons” of the life of the pop group, which works as extremely effective metaphor for the band’s punctuated progression. One of each of the four group members narrates each of the “seasonal” segments of the show. We discover how the band members struggled with personal demons (including Tommy’s overbearing gambling problem), the mob (this is New Jersey after all), intraband feuds and romances along the road to success and after.

There are some unexpected surprises in the band’s true story along the way, including the appearance of a young thug that would go on to become a famous Oscar-winning film actor. The show’s songs, many of which are well known pop hits that will be familiar to older member of the audience (as well as younger oldies lovers) including “Sherry,” “Big Girls Don’t Cry,” “Walk Like a Man,” and “December 1963 (Oh What a Night),” are worked in seamlessly, and at many points in the show, take us straight to musical heaven. 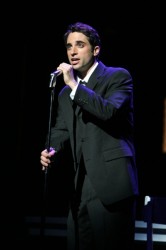 This angelic charge is led by Joseph Leo Bwarie (who has played Frankie Valli for nearly four years in 40 cities) nails Valli’s trademark falsetto sound. While Bwarie is simply glorious in the role (both in his singing and his acting), the other principals are very strong as well, and the harmonies that these four gentlemen deliver constantly soar. Preston Truman Boyd is very likable as the wholesome Gaudio, John Gardiner captures the smarmy yet charming Tommy DeVito and Michael Lomenda gets his share of well-earned laughs in the Massi role. The supporting players complete a solid cast.

The show looks amazing, with the action on a split level bridge-like set, with colorful period set pieces and Lichtenstein lithograph-like projections that enhance the scenic design (by Klara Zieglerova). Jess Goldstein’s groovy costumes are terrific with the band’s outfits becoming noticeably more stylized over the course of the show. The lighting by Howard Binkley is spectacular, and is especially used to great effect to evoke the excitement of the band’s pivotal concert and TV performances.

Jersey Boys is an electric show that not only thoroughly entertains us but also tells us an interesting, complex and poetic story of one of the most talented and prolific American pop bands. You may be surprised at how thrilling their nostalgic songs sound live, and with this great cast in this fine production, this iconic show, that is certain to enthrall audiences for years to come, looks as good as ever.

Running time: Two hours and 30 minutes, including a 15 minute intermission. 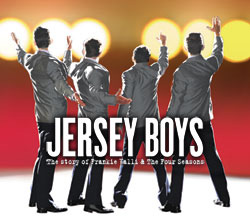