The National Tour of La Cage aux Folles is presented by Broadway Across America and is now playing at Hippodrome Theatre. Jerry Herman’s Tony Award-winning score is melodious and fun, while Harvey Fiersteins funny, poignant and heart-warming book and ‘love story’ still tugs at your heart 26 years after it took Broadway by storm. 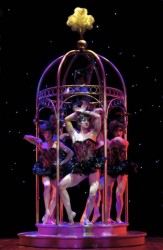 The Cagelles. Photo by Paul Kolnik.

The costumes are stupendous. The Cagelles are dangerously phenomenal! You won’t be disappointed with all the vivacious life springing forth on the stage during this production. Here you will witness the story of Georges (George Hamilton) who owns the glamorous glitzy nightclub where his partner, Albin (Christopher Sieber) is the club’s drag star, Zaza. But the feathers fly and the glitter glows when Georges’s son brings his fiancée and her conservative parents home for dinner. It makes for a wildly entertaining tale.

With fascinating sets, designed by Tim Shortall, La Cage shows you the gaudy pink interior of the night club, which creates that sassy atmosphere for The Cagelles to do their work with a beautiful sturdy bird cage, and luxurious black background dotted with twinkling blue lights. We also get the lavish interior of Georges (George Hamilton) and Albin’s (Christopher Sieber) home, decorated with the signature chaise lounge, and a large headless armless bust of a nude man. You immediately get the sense of a happy homey couple, one cross-dressing diva and one caring man, dwelling on this set as if it were their actual home. And the costumes, designed by Matthew Wright, are ravishing, fabulous, glamorous, sensual and much more. The show would not be complete without all of the glitzy glitter on The Cagelles’ outfits, or the bugle beads dangling from Zaza’s many dresses throughout her scenes performing at the club. Even the red velvet dinner jacket on George Hamilton’s character screams fabulous. 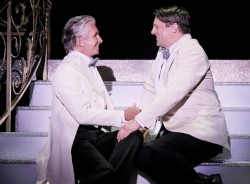 Watch out for the wigs – they are fantastic and in a scene featuring a lot of drag queens excellent wigs are a must! Wright does wonderful work with all the various styles and colors giving each character and Cagelle their own unique look. The Cagelles (the girls of the club) are engaging and hilarious to watch as they perform their dance routines and interact with each other in a catty manner, constantly trying to steal the spotlight from the others when on the stage. Each one provides a unique talent rendering a show that audiences will love. Chantal (Donald C. Shorter Jr.) shows off his vocal range from basement lows to soprano highs and has you laughing as he does. Hanna (Mark Roland) cracks her fiery whip and struts across the stage, performing acrobatic feats on the birdcage that will take your breath away. Phaedra (Trevor Downey) spends her time showing off her gymnastic abilities, splits and flips that make the other girls jealous. Angelique (Matt Anctil), Bitelle (Logan Keslar), and Mercedes (Terry Lavell) high-kick, tap-dance, and smile with such vibrant energy that it’s hard to take your eyes off-them, especially when they start bouncing their big balls around. Many of The Cagelles have come directly from the Tony Award-winning Broadway revival, allowing audiences to enjoy their critically acclaimed Broadway performances.

But the real magic is in the chemistry of the show’s two leads. George Hamilton and Christopher Sieber (two-time Tony Award nominee) present their characters with such passion that their relationship is truly believable. They flirt and attend to each other’s nuances and behaviors like an old married couple would. When they dance they are comfortable in each other’s arms, and when they sing together they sing in perfect harmony. Hamilton has great expressions when searching for the right lines to explain certain situations to Albin. His eyes are lively and vibrant and even when the situation on stage is difficult, he tries to conquer it with a flashing white smile. His voice is melodious as he sings “Song on the Sand,” a beautiful love ballad about the time when he and Albin first met.

And Christopher Sieber takes on quite the challenge, succeeding in a magnificent portrayal of both Albin and Zaza. His expressions are priceless as he flips through the mirror in disgust, tired of the depressed reflection he sees as he sings his ‘pick-me-up’ number, “(A Little More) Mascara.” This challenging scene requires him to apply all of his drag queen make-up, false eyelashes, shoes, and get into his dress, while onstage singing. Sieber does it flawlessly as if he’s been painting his face and dressing while singing in front of an audience for years. His audience interactions keep everyone in side-splitting laughter, and watching him is simply delightful no matter what his character is doing. Sieber executes the role of “over-the-top” diva to perfection with overreactions over simple things – and arms that flail in every direction. His most powerful moment occurs during the first act ending “I Am What I Am.” He brings the audience to thunderous standing applause as he belts his heart out, declaring the song’s title. It’s a true moment of theatrical awe.

And a special mention to the crazy butler, son and wife-to-be and the inlaws to be – played by Billy Harringtan Tighe (Jean-Michel), Bernard Burak Sheredy (M. Renaud/M. Dindon), Cathy Newman  (Mme. Dindon/Mme. Renaud, Jeigh Madjus as Jacob, Gay Marshall as Jacqueline, and Allison Blair McDowell as Anne. All are excellent singers. 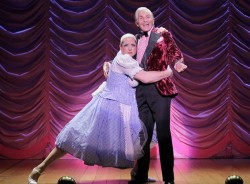 So go for the mystery, the magic, and the mood and those costumes  and the love – because all the elements of a sparkling fabulous Broadway show are there. And knows? You might even meet your mistress, your boyfriend, and your wife. It’s the best of times!