You won’t see a cow jumping over the moon but you will find hilarity and scenes bursting with fun in Fells Point Corner Theatre’s production of Little Dog Laughed. Directed by Steve Goldklang, the production is priceless as it delivers a rollercoaster of laughs, serious moments, and real life at its finest. 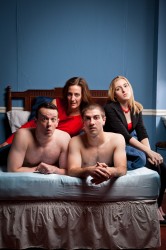 Diane (Holly Pasciullo) is a brilliant Hollywood movie agent who has the perfect up-coming star as her client; Mitchell (Tom Burns). If she could just keep one teeny tiny factor of his private life hidden away in the closet the pair would be golden. But enter the call-boy, Alex (Christopher Krysztofiak) who sleeps with men but has a girlfriend, Ellen (Emma Healey) and all hell breaks loose. Watch the hilarity unfold through touching moments of discovery, intimacy and b******t as the great Hollywood dream comes to life on the stage.

We’re only given one set, designed by Roy Steinman, but it provides an air of comfort for these players. Set in Mitchell’s hotel room the space creates the unique feeling of home away from home without feeling too foreign or too comfortable. The walls are papered with contrasting blue-gray and navy stripes while a big bed takes up the centerpiece, allowing for that intimacy to flow easily between Alex and Mitchell when the scene calls for it. There’s even a scene that’s meant to occur in a bar which is created with a simple table off to the side in the black space of the stage, but here it’s the soundtrack that sets the mood. Sound Designer Dennis Wood overlays the ‘bar scene’ with a bass-heavy club-style music really giving the feeling that we’ve slipped away from the hotel and down into a seedy club in the heart of New York City.

The show presents four very different characters each interacting with each other and the direction given by Goldklang to guide this interaction is superior. The actors make good use of the space provided when on stage with another character. Goldklang presents clear intent to their movements as they shift from the dressing table to the bed or linger in the doorway with a conversation occurring over their shoulder.

The interactions between Alex (Chris Krysztofiak) and Mitchell (Tom Burns) are compelling and captivating. Krysztofiak embodies a chipper youth who is somewhat grounded in reality as he presents himself as the call-boy. His performance is laced with a believable attitude – leaning harsh against a chair when he’s moody, pouting when he’s flirting; and his voice projects the right level of emotion when speaking. Burns plays his level of confusion with consistency and ease. His portrayal of drunk in the opening scene is done with tact and not over-dramatized so it plays out as truthful. When the pair interacts you can hardly take your eyes off of them. Krysztofiak and Burns start a mounting awkwardness in certain scenes that is palpable; with strained glances and nervous gestures allowing them to show the audience the strange encounter as they feel it. They each show ease slipping from one emotion to the other. Burns shows a great deal of emotion in his facial features when shouting at his agent on the phone; the same can be said of Krysztofiak when meeting his girlfriend Ellen (Emma Healey) at the bar to discuss his day. The pair create a dynamic but entertaining scene whilst lying in bed, each pretending to be asleep while the other pops up and addresses aloud their thoughts to the situation. The timing is hysterical as Burns sits up and Krysztofiak throws himself back down; almost like watching toast go up and down in a toaster.

But the scene stealer of the show comes from the dynamic character portrayed by Holly Pasciullo. She’s a combination of sassy but poised, poignant yet smooth; a plethora of facial expressions and gestures to go with the complex character as she executes each scene with great ferocity. When Pasciullo first interacts with Mitchell in his hotel room she is almost motherly but in a kaniving ‘mother-knows-best’ sort of way as she slinks through the room and assesses the situation, trying to control things with her clipped responses and haughty smirks. But the most amazing moment is when Pasciullo and Burns create a third character through their speeches. They are seated at a table in an interview with an ‘unseen’ playwright, however they execute the scene with such intensity in their lines, gazing absently at the end of the table, that you almost expect to hear the third person respond. Pasciullo pops back and forth between speaking her demure but commanding lines to the unseen playwright and her loud outrageous inner thoughts, which she directs at the audience. Watching her flip-flop is like watching extreme ping-pong, it’s riveting and hilarious as she tosses her head, rolls her eyes, and then composes herself all within a few seconds. Pasciullo’s portrayal of the character is nothing short of theatrical genius.

Hey diddle diddle forget the cat and the fiddle and come on down to the Fells Point Corner Theatre’s production of Little Dog Laughed.