With a cast of unique characters – the Compass Rose Studio Theater’s production of Lost In Yonkers puts the ‘fun’ in dysfunctional family. The story is a moving yet comedic tale of family; two grandsons being placed in their estranged grandmother’s stern care while their father goes away to work, and the way a family comes together in a time of need despite their odd quirks and dysfunctions. Only ever taking place in the grandmother’s apartment – we gain a world of knowledge about this disconnected family through watching their engaging interactions with each other. Director Brandon McCoy brings together a talented group of actors and guides them with insight to create a brilliant, funny, and moving performance. 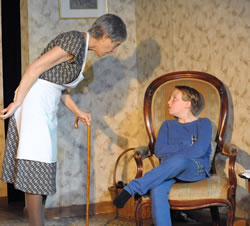 From the moment you see the set you feel transported back in time to 1942. Set designers Jo Ann Gidos and Sophie George spare no details in creating this antiquated yet cozy apartment. The wallpaper has an off-white coloring with paisley pattering in faded shades of gray and even has bubbles trapped beneath it on the wall that borders the bathroom. This delicate attention to detail creates the illusion of poverty without having to strip the set of its basic furnishings. Gidos and George use a large off-white striped sofa as the centerpiece to the room, complete with lace doilies, filling the space with the notion of simplicity. Aged photographs adorn the walls, and there are simple careworn woven rugs to decorate the otherwise bare floor. They create an atmosphere that feels well lived in, and homey without overloading the stage with unnecessary props and furniture. The costumes, designed by Meaghan O’Bierne, add an extra zing to the period piece. They add not only to the sense of being in another time, but they give a little extra life to each of the characters. O’Bierne makes great use out of a double-breasted, black pinstripe suit complete with a black fedora and leather shoes with white spats to help further define Uncle Louie (Daniel Siefring) as a mobster. She does the same for the children, fitting the youngest in tweed high-kneed trousers and long black stocking socks. The outfits certainly enhance the unique qualities of the characters throughout the production.

And these unique characters are dynamic. Each of the actors are well-fitted to their roles, finding quirks and various physical embodiments to further enrich the lives of these fictitious people. The two sons, Jay (Eli Pendry) and Arty (Will Fritz) are lively children despite their difficult situation. Pendry, as the older of the two, shows moments of wisdom to his character’s credit as he sits staring pensively at the floor, or gazing deep in thought out the window. His quips in response to Fritz’s character are laced with the slight edge of sarcasm, making them engaging and witty. Pendry channels the right level of emotional outbursts for the teenage character, having a moody explosion resulting in tears which he then quickly but convincingly clears up with a few off-handed comments. Fritz’s portrayal of the younger brother is astounding. He provides high-energetic levels to the character, with a spitfire attitude when mouthing off to his grandmother. Together the two young men have brilliant chemistry between them, providing very convincing performances of brotherhood and camaraderie. They respond with wide-eyed believable fear when being reprimanded, and play well off of each other throughout the show.

The young boys’ father, Eddie (Anthony Bosco), is presented at first as a very nervous and meek man. Bosco physically manifests these qualities through his spastic emotional reactions – eyes popping out of his head as he fusses over the doilies on the back of the couch, the constant tugging at his necktie as he complains about the heat. He is expressive and motivated as he paces back and forth from the living room to the off-stage bedroom. Aunty Bella (Brianna Letourneau) presents with similar energy. Her character is aloof and often caught in her own world and Letourneau’s performance gives great inside to that confined little world. She is able to provide the correct balance required of a character who sees the world differently than the rest of us without collapsing so far into the character that we no longer recognize what’s happening. Letourneau has believably ditzy interactions with the boys, and has real excitement in her voice as she overexcites herself in certain scenes. She comes to a genuine emotional crescendo late in act II that is touching and moving to watch. Her commitment to the character is strong and this is easily seen through her vocal and physical choices throughout the show.

But if there’s a character that really fills the stage it’s Uncle Louie (Daniel Siefring). Dressed to the stereotypical epitome of a mobster, from the moment he enters the apartment you can’t take your eyes off him. Siefring adapts a New York mobster style accent that is believable and enjoyable. He speaks with an oily yet smooth voice as he tells his tales, and bursts easily from over-the-top anger to overjoyed chuckles. Siefring steals the scene when he slowly swipes his fingers across his eyebrows, makes a full-bodied swinging gesture and winks as he says, “that’s moxie.” And then there’s Aunt Gert (Sarah Strasser) who we only meet for a moment, but she lives up to her descriptions created by the other characters so well that you want to see more of her. Described as a nervous woman who can’t speak correctly, Strasser fits the bill with her crumpled form as she sits nervously on the couch. And when she speaks, you burst into laughter because she has mastered the ‘speaking while inhaling’ as was foretold by Arty and Jay.

Grandma Kurnitz is perhaps the most stunning performance throughout the entire piece. Portrayed by Lucinda Merry-Browne, the aging German grandmother is a formidable force to be reckoned with and Merry-Browne’s performance does not disappoint. She masters the intimidating physicality of this stern woman despite the character’s need for a cane. Merry-Browne makes wonderful use of this prop, really leaning her weight upon it and walking with an appropriate limp to present a convincing crippled character. The broken English overlaid with the thick German accent adds another layer of foreboding to this character and again merry-Browne does not disappoint. She speaks flawlessly as if she’d been speaking broken German-accented English all her life. Her face is extremely expressive; narrowing her eyes in suspicion and anger at her grandson’s, showing wide shocked eyes when Bella has news. She presents a riled-up defiance, letting nothing get to her; truly becoming the steel that her character is compared to throughout the show.

So come get lost, hopefully not on the way to this amazing production of Lost in Yonkers at the Compass Rose Studio Theater in Annapolis.