For its second production of the season, the Washington National Opera is offering a daringly revisionist interpretation of Donizetti’s bel canto classic, Lucia di Lammermoor. Director David Alden presents Luciaas a case study of early Victorian sexual politics and psychopathology, with the action set in the dark recesses of the Victorian literary imagination.  At the premiere on Thursday night, Alden’s highly stylized and often static direction yielded uneven dramatic results, with the action only achieving a visionary intensity in the climactic mad scene. 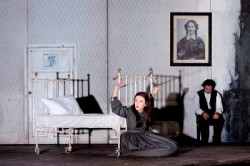 Imported from the English National Opera, Alden’s production updates the action from the late-seventeenth century to the time of the opera’s composition in the 1830s.  The funereal atmosphere and claustrophobic interiors of a crumbling Victorian house take the place of the Scottish highlands in the opening scenes, foregrounding an interpretation that is essentially domestic and psychosexual.  Lucia’s bed provides a central image, alternatively located in her childhood bedroom, matrimonial chamber, and a sanatorium.  In Act 2, Enrico plays with a large spinning top and teases Lucia by taking away her favorite teddy bear, all before tying his sister to the bed with a jump rope and fondling her.

Alden’s interpretation of Lucia is clearly indebted to The Madwoman in the Attic, a classic work of feminist literary theory, which argues that the paradigmatic portrayal of nineteenth century womanhood vacillated between an idealized “angel” and a “monster” or madwoman seeking revenge.  Before her descent into madness, Alden’s Lucia is an infantilized victim of male desire, an object to be acted upon rather than a subject in her own right.  Yet Alden’s heavy-handed treatment of these ideas offers a characterization of Lucia that is an academic dichotomy rather than a dramatic arc that builds organically from moment to moment.

Yet the payoff came after the intermission with an electrifying mad scene of genuine imaginative power.  For the first time in the evening, Alden used his bag of directorial tricks to create a scene of startling originality, visionary intensity, and dramatic power.  Lucia’s entrance in the mad scene (which I will not spoil) is itself a stunning coup de théâtre, and the scene’s nightmarish evocation of madness took on the epic stature of Greek tragedy as it brought us further and further into the haunted recesses of Lucia’s fragmented and hallucinatory imagination.  The modern-sounding cadenza – unfamiliar to me – was full of searching harmonies, and only a less than ethereal-sounding glass harmonica detracted from the scene.  While less imaginatively staged, the concluding tomb scene proved the second highlight of the evening, with Edgardo’s two solos bringing the performance to an emotionally gripping close.

The choice of Sarah Coburn as the first night Lucia harks back to the tradition of casting a light coloratura soprano in the title role rather than a singer in the tradition of Maria Callas or Joan Sutherland.  Coburn exhibited a superb coloratura technique, except for a lack of finesse at the very top of her register, and her passagework throughout the evening was generally dazzling.  Coburn’s sweet tone and lighter-scaled voice lent itself to a doll-child interpretation of Lucia emphasizing her pathetic vulnerability, but one wished for a voice one size larger and capable of painting in paler and darker tones for a more complete portrayal of the protagonist.  That said, it is a testament to Coburn’s dramatic skills that she was able to paint a psychologically convincing portrait and sustain a dramatically riveting vocal narrative in the mad scene, all the while navigating the runs and trills with apparent ease.

The male singers in the cast were respectable if largely undistinguished.  Until the tomb scene in Act 3 (for which he was apparently saving himself), Saimur Pirgu delivered an unremarkable performance as Edgardo but pulled out the stops to sing his two concluding solos with ardor and declamatory power, if not great subtlety.  Michael Chioldi’s mid-scaled Enrico was more over-grown bully than menacing villain. Mirco Palazzi was a firm-voiced Raimondo, and Corey Evan Rotz a hilariously self-satisfied, if somewhat thin sounding, Arturo.

Conductor Philippe Auguin tended to favor broad, and occasionally plodding, tempos and struggled somewhat with balances.  In the Act 2 sextet, Auguin sculpted a powerful crescendo with his orchestral forces but overwhelmed the mid-sized voices of his cast. The mad scene, however, was supported with great sensitivity and sustained tension.

Running time: Approximately 2 hours and 40 minutes, including one 20-minute intermission.

Lucia di Lammermoor continues, with a rotating cast, through November 19, 2011.  Tickets are available at the Kennedy Center Box Office, through Instant Charge at (202) 467-4600, or online.