Noises Off at The Little Theatre of Alexandria

The Little Theatre of Alexandria presents Noises Off, Michael Frayn’s energetic door-slamming British farce about how life behind the theatre stage can be just as dramatic (if not more so) than the performance itself. Directed by C. Evans Kirk. 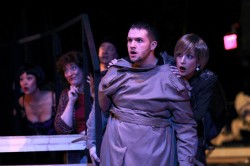 Set Designers C. Evans Kirk and Dan Remmers create an ambitiously large set constructed to resemble the “set” of a stately living room in a country home, with stylish artwork and posh furniture pieces. The set is cleverly able to rotate, whereupon we view the backside of the set, complete with standard backstage fare such as lumber, tools, and scattered props. Lighting Designer Chris Hardy keeps the stage well lit, accompanied by sound design by Alan Wray, who uses cues such as a ringing telephone. Costume Designer Annie Vroom dresses the characters in respectable dress suits, with the exception of a character that spends most of her onstage time in racy lingerie!

The play begins at the technical rehearsal for Nothing On, a production that the cast mates are working on. Gayle Nichols-Grimes eludes a kind of vacant wit and humor as Dotty Otley, a harried and forgetful actress that is pushing the director Lloyd Dallas, played by Bruce Alan Rauscher, to his limit. Frustrated and stressed, Lloyd continually interrupts rehearsal to argue with the actors about the script, plot, character motives, and blocking. The audience sees that the play they are rehearsing is a farce, the plot being that multiple people enter a home, all of whom believe that they have it to themselves. As the characters narrowly escape each other, they become scared and confused as they see that things are being moved around in a house that they believe is otherwise empty. Frederick Fellowes (Lars Klores) and Rachael Hubbard (Belinda Blair) are entertaining as homeowners that unexpectedly return from a trip abroad to find that their housekeeper Dotty had made herself a bit more welcome in their home than is comfortable. Realtor Garry Lejeune (Adam Downs) picks the same unfortunate night to “entertain” a prospective renter, Brooke Ashton (Kat Sanchez). 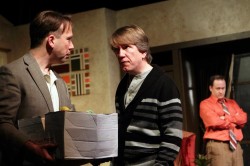 Act two presents opening night of Nothing On, and this time we see things from the other side of the stage. Stagehands Timothy Allgood (John Crowley) and Poppy Norton-Taylor (Elizabeth Heir) are humorously harried to their breaking points as they try to run the show among the cast mates’ own personal drama. When gossip and rumors run rampant, chaos ensues, leading to clashing emotions, fighting, misplaced props, and confusion. Pandemonium takes over as the actors try desperately to stay in character and keep on cue. Calamities pile over one another, as is common in farce, but in this circumstance it may be happening too quickly for even the best farce enthusiast. Moments of hilarity are there – if you can catch them – but a lot of the dialogue is drowned out by the clamor of everyone’s feet thundering around the stage at once. With every character onstage, so much happens at once, and it is often hard to choose where to focus your attention.

All in all, the show was very entertaining. The actors have my respect for having the stamina to perform this vigorous show, as at times it was exhausting to merely watch. I sense a lot of empty coffee cups backstage!