Very few people are normal, really, deep down in their private lives. And you’ll find very little normalcy in this exuberant intimate comedic production of Private Lives presented by Everyman Theatre. Directed by Carl Schurr, the play bubbles to life while presenting a quaint if a bit eccentric take on married couples.

The show takes place in the 1930’s, first on the terrace of a hotel in France and then later in a flat in Paris. We’re presented with Elyot (Bruce Randolph Nelson) who has recently married Sibyl (Erin Lindsey Krom) and the couple are starting their honeymoon. But in the next suite over, sharing the terrace, are Amanda (Deborah Hazlett) and Victor (Peter Wray) who are also recently married and also starting their honeymoon. Of course none of this would be funny if it weren’t for the fact that Amanda and Elyot were previously married and their marriage ended in diabolical disaster. The show presents laugh after laugh as the truth unfolds and gives audiences a look into their not so private lives. 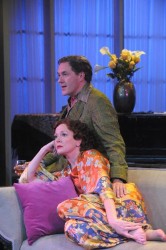 The scenic setting is divine. Daniel Ettinger puts genius to work in his construction of the outdoor terrace and then of Amanda’s Parisian flat. There are tall, sweeping French doors that lead into the hotel room, which when open share a glimpse of furniture and painted walls with pictures hung upon them, and a long elegant white balcony rail, accented with crawling ivy in the corners, for the actors to lean upon casually as they gaze out over the beach. It’s picturesque and creates a romantic scene for these two couples meant to be enjoying their honeymoons. Ettinger creates a vibrant interior for the Parisian flat as well. The walls are a mellow yet enchanting turquoise, low-lit wall sconces adding to the intimate atmosphere and an exquisite white sofa and matching chair set; all combining to make a beautiful scene in which disaster will wreak havoc. The beauty of the set and the liveliness of the characters is enhanced by the timely appropriateness of the costumes, designed by David Burdick. Burdick uses tasteful adornments in his design work – simple white gloves to match the lacey white dress worn by Sibyl giving her the appearance of innocence as the newlywed bride. He dresses Amanda’s character in luxurious silk dressing robes, then in a silk evening gown of bright teal; speaking volumes of her elegance and experiences. The man is  always outfitted in the finest of suits, even when Elyot dons pajamas, Burdick has taken care to make them fancy with patterns to show good taste.

The characters are a riot. In a fast-paced high-end comedy these characters are the driving force behind the show and the actors do not disappoint. The chemistry amongst the four on stage is brilliant and vibrant; bubbling over with a sense of hostility and love, never once leaving a dull moment during the performance. Their interactions are priceless as they exchange barbs and bites at one another, first Elyot and Sibyl, then Victor and Amanda, later Elyot and Amanda, the girls at each other, the boys, and finally Victor and Sibyl. It’s a lot to watch but a true pleasure as these actors live the characters up to their fullest potential.

Sibyl (Erin Lindsey Krom) is presented as a young giddy new bride who is gushing with nubile love and is eager to please her new husband. Krom twitters about the stage doting on Elyot as if she has never seen another man and never will again. But her demeanor changes quickly as the couple begin to bicker. Krom glides with ease from the innocent lovebird into a toddler-like temper-tantrum, screaming and crying as her face reddens. Victor (Peter Wray) presents as a dashing man who was raised on chivalry and courtesy. His facial expressions are priceless as he begins to bicker with Amanda over her previous husband. And when Wray goes to defend his new wife’s honor, watch as he circles around the stage like an old English gentlemen, upright in stature, back arched fists ready. The two present wonderful interactions with each other and their spouses, each well-prepared with the delivery of their lines, often affording great comic timing which serves to enhance the hilarity of the show.

Elyot (Bruce Randolph Nelson) is a dynamic character who appears charming but also has a wildly explosive side. His tasteful affectations, when lounging on the sofa in the flat or twirling his fingers with a lit cigarette, give him the charm and airs of a rich man in the 1930’s. Nelson is brimming with excitement throughout his arguments, eyes wide and wily, with his physicality matching his vocal energy as he paces around the stage, shouting and reacting to every barb Amanda throws his way.

Amanda (Deborah Hazlett) presents in a similar fashion. A mature woman who knows of love and loss but bristles with jagged sophistication, to later turn into a spiky she-devil rampaging around the apartment attacking Nelson’s character. Hazlett has a true understanding of comic timing for every line she delivers is a laugh, and while some credit must go to the playwright, Hazlett delivers these lines with such certainty and impeccable timing that you find yourself in stitches nearly every time she talks. Nelson and Hazlett have diabolical chemistry fizzling between them. The tension mounts and they erupt over one another like an agitated volcano. They share similar gestures in perfect unison making their previous marriage all the more present throughout the show. There is a beautiful moment on the terrace where both Nelson and Hazlett are leaning against the railing, each gripping the railing in the manner of the other, and they gaze wistfully out on the beach. They recall a memory together, sip their cocktails in unison and complete each other’s sentences as the memory completes. The pair works extremely well together delivering the high levels of energy, bouncing from maddeningly in love one moment to at each other’s throats the next.

Don’t forget our brief moment of comic relief, in this already hilarious play, when the maid, Louise (Sophie Hinderberger) arrives in the flat to see it practically destroyed. What ensues is a brilliant scene-stealing moment.

Look deep into your private life and realize that you need an enjoyable hilarious night out at the theatre and come to see Everyman Theatre’s production of Noel Coward’s Private Lives.