I have seen several Cirque du Soleil productions, but Quidam at Verizon Center is my favorite. It’s intimate, and fun, and filled with eye-popping and jaw-dropping super-human performances of acrobatics, aerial performances, and gymnastics, and so much more. 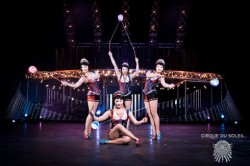 The look of Quidam is cool. When you walk into the Verizon Center you see Michael Michel Crête’s set which consists of a huge arch  (they call it the “téléphérique”), which is five 120 foot all-aluminum rails, that have two trolleys from one end to the other, and they move the performers and acrobatic equipment and and raise or lower them depending on the particular act.” It’s so cool watching the performers moving across the arches.

Dominique Lemieux’s colorful and sometimes ‘unique’ costumes are gorgeous as they usually are in a Cirque show. Benoit Jutra’s toe-tapping score is the most melodic score I have heard at any Cirque show and I’ll buy the CD if it’s available. Debra Brown’s choreography is energetic and physically demanding.

I’m an avid hockey fan and I have been to dozens of hockey games and concerts at The Verizon Center and I probably have some permanent hearing loss from being bombarded by usually blasting sound, but here François Bergeron’s sound design is perfection and so pleasant to listen to. So kudos to the sound team who got it right.

And Quidam has a pretty good story. You begin in a living room where young Zoe is ignored by her parents. A headless person slithers in and gives Zoe a blue bowler hat which transports her to a magical and sometimes scary word filled with entertaining characters, including a Rafael Munhoz`s who plays the zombie-like Boum-Boum. And what a journey it is!

But it’s the jaw-dropping, “How did they do that?” acts that gives a Cirque du Soleil production its heart and produces gasps and loud applaud from the ‘stunned’ and appreciate audience, and Quidam delivers many of these thrills.

A young woman/contortionist twists and intertwines and then separates and does other incredible feats while suspended with with red fabric, while another young woman shows incredible hand strength while maneuvering around balancing canes. There’s jugging and amazing aerial acrobatics and gymnastics that you will be talking about for days after you leave Quidam. 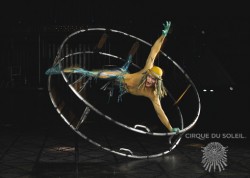 But the acts that I loved and received the loudest applause were a man spinning, twisting and performing acrobatics and somersaults in a German Wheel (you had to see this one to believe it), Chinese women playing with the diabolo – where they are holding two sticks with a string and juggling and tossing and catching a wooden spool that is thrown up way-way-high in the air and they always catch them as they return. And they never miss! And I love the fast jumping rope skipping routine. In Banquine, 15 artists, including many young performers, perform spectacular acrobatics and become human pyramids. The audience went crazy especially when a young girl was thrown way up in the air – where she was caught by third man who was on the top of the pyramid. 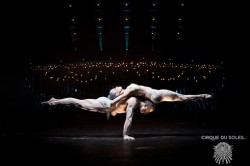 But the most amazing act that received the most “Oh my Gods!” was ‘Statue,’ where two super-human strong, flexible performers create positions that are gorgeous and mind boggling.

This is a great show to take the entire family, and if you have or have not been to a Cirque du Soleil production before – Quidam will leave you smiling and wondering how they did what they did. Quidam is high-flying fun! It’s a journey worth taking.

Running Time: Two hours and 45 minutes, including a 20 minute intermission.

Watch highlights from the ‘Rope Skippers Act’ from Quidam.