You will have an absorbing, riveting evening of psychological theater at Quotidian Theatre Company’s production of Conor McPherson’s Shining City. Played to the hilt by a talented ensemble cast of four in successive scenes that focus on themes of guilt and rage, this is a Shining City not to be missed. 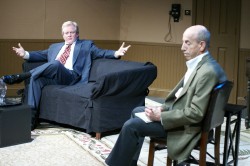 Steve Beall as John and John Decker as Ian. Photo by Audrey Cefaly.

Under the superb tightly controlled direction of Jack Sbarbori, these four actors -Michael Avolio (Laurence), Steve Beall (John), John Decker (Ian), and Laura Russel  (Neasa) – convey the angst of tortured individuals during successive months in a therapist’s office on the second floor of a building near Phibsborough Road in Dublin, Ireland. Irish themes of gult, remorse and forgiveness are the subject here, and Sbarbori goes right to the core of these themes with deep penetration and probing skill.

The many monologues of the character of John are a very demanding test of an actor’s skill and Steve Beall is more than up to the task. Beall delivers a performance of very human feeling and acuity. Laura Russell as Neasa is a standout and has a very natural unstudied theatrical presence. John Decker as Ian and Michael Avolio as Laurence deliver solid performances.

The atmosphere of claustrophobia is enhanced by the continual sound of street noise and traffic. Very interesting and evocative musical interludes were played during the scene changes and this helped to convey a very fluid mood. Sbarbori is a dynamic triple threat talent —as, aside from his superb direction, he has designed the sound and designed the set. The very appropriate set is designed in shades of brown which reinforces the very realistic problems these characters are grappling with. The evocative lighting design by Don Slater nicely conveys the intimacy of the successive scenes.

Because it run over two hours with no intermission, this play demands some patience and concentration – but the rewards are in the cummulative effect and catharsis that is achieved. Kudos to  Quotidian Theatre Company for tackling this ambitious play.