‘STAY’ at Theater of the First Amendment

As one sits expectantly for Stay, looking at the fascinating stage space prepared, Death Cab for Cutie’s intensely dramatic pop epic “Transatlanticism” plays and one feels… a lot. Something big is coming. A stage is open, no curtain, no layers built with various flats or deeper masking to hide some later stage. We see great space, a beach with a human-built rock wall, a barrier for tides at least, various rocks and shells framing the flat stage, and several small rocks on the lip of the stage stacked on other rocks, in a very unnatural, humans-must-have-been-there sort of way. There are suitcases. Lost luggage? And there are transparent plastic cubes with water in them of various sizes. This simple stage, as deep as the Lansburgh Stage is, lays in front of a screen with a sky projection, cirrus clouds soaring up into the thinnest space above Earth. 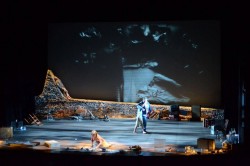 When a boy emerges (Wee Moon, played by Theo Chick or Garrett Christian, depending on the performance), plays with shells, opens suitcases, something seems about to be discovered in this halfway place, something between human experience and the hard rocks on the shore. The stage says already what the program tells the viewer, this is about impermanence. The suitcases are human transience and the water and the rocks are forever. The people that may come to this place will be amid these elements of water, rock, and open space, probably dealing with some something, some human something that seems far away and so close. James Kronzer’s set poetically provides every element of Stay in its frame.

Shortly, actors and dancers do appear. Speeches are made, drifting in and out of conversation, with hardly any story told having any apparent lasting meaning or permanence. Dances happen, drifting in and out of languid watery movements, clearly human waves on this beach, but with little offered in terms of solidity, any unambiguously occurring event, or any definite line of story. 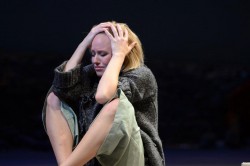 Despite the excellent frame of the set for the show, Stay is a bit of a muddled piece. Combining dance, drama, video projection, and music, a work in progress composed for the Theater of the First Amendment, it is a world premiere, written and directed by Heather McDonald, choreographed by Susan Shields. McDonald and Shields use dance and dramatic elements, as well as SLAM multimedia designed by Gregory Crane, and a great deal of stirring, emo-type (a la the “Transatlanticism” overture) mostly wordless pop music to wrestle with the issue of impermanence and all the ways we long for things, people, and life.

The show never builds anything as majestic or dramatic as its music (used with permission by Eluvium, Einaudi, Johannsen, Elbow, Cloud Cult, and Moby). The metaphorical waves of the beach setting appear to be well at work washing away any depth or great clarity from the stories being told before they have a chance to reach the illusion of permanence. In this sense, that McDonald’s show is presenting a meditation on things not lasting, that we never have enough story told to care about the characters being introduced, that we get mere fragments and brief, apparently very emotional dance pieces, gorgeously performed but without any clear substance to consider, it is certainly a success.

However, anyone would want to know more about what is being portrayed here. While the mood of Stay is melancholy, dwelling on this longing for permanence, the tone is a rather intellectual and brutal, stealing away all the familiar outlines of scenes and characters we are used to looking for in drama.

As this is clearly a piece that is growing in the long-term, showing its process here in front of audiences, the workshop is easy enough to recognize, however. There is a clear divide between the group of actors here and the group of dancers. There are people on stage who do some speaking, but mostly dance, and others who mostly speak and occasionally participate in the movement pieces. The dancers have characters in the stories sometimes, and are more interesting to look at, and the actors speak a good bit, and generally look like they are just sitting around ruminating on people and things gone by.

In one dance driven scene, Catriona (Laura Urgelles), a Cuban woman, one of the more physical artists, conveys in dance her torment and a sense of protracted time in an extended struggle, leading away from Whalen (James Whalen), one of the more vocal artists, pressing scarves to herself and then releasing them. However, what the scarves mean, what the dance means, what has happened here, is unclear. Perhaps the scarves are dreams that were lost? Perhaps they are a relationship that was falling apart? Perhaps they were children. What matters in this scene, and in the rest of Stay, is the sense of not loss, but losing. Things pass. Scarves pass, apparently. Context is difficult to establish in the crucible of eternal impermanence.

Characters pass, the perfect structure of sea shells is considered, resurrection is considered – specifically Jesus’ resurrection on Easter, and much is ruminated on these themes, but nothing is really expounded on to any effect. Almost all meaning and structure wash away on this beach.

Most frustrating of all, despite a lot of good looking multi-media and impressive dance work, nothing really seems to be motivated by anything else. The script feels like a series of fragments and meditations, some jokes and oddball images, some great emotions, but all undeveloped or underdeveloped. At one point, a man watches Catriona moving away from him and he states “I’m going to marry her,” and then they are both gone. The moment is never referenced again. This may be a moving moment in the context of our fleeting lives, of ships that pass in the night, of our never having a grasp on our own lives, but the show does nothing to make clear these themes other than to keep passing heavy subjects along such as self-mutilation and lingering deaths with only ever a very shallow inquiry into them. 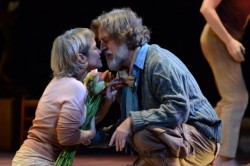 Great talent was involved in the process of making this, and McDonald and the Theater of the First Amendment have achieved a great deal in their past, making bold works and inspiring minds — perhaps especially Dream of a Common Language. The godly look and voice of John Lescault as Blue, the very entertaining Carolyn Swift as Gonzo-like Pheeny, the recently Helen Hayes Award-winning Naomi Jacobson — always a delight on DC stages, the powerfully emotive dances of Kalynn Marin as Shimara and Scott Rink as Burrows, all add to little here against McDonald’s ultimately rather vapid whole.

Put in the context, again, of the theme of impermanence, and a sense of fleeting life, Stay is a potentially moving spectacle — if still frustrating for its disjointed and self-destructing storylines.

Stay plays through November 27, 2011, at Shakespeare Theatre Company’s Lansburgh Theatre – 450 7th Street NW, in Washington D.C. For tickets, purchase them at the door or online.
__
Read an interview with Heather McDonald.

Read an interview with Susan Shields.