‘Talking With’ at American University’s Department of Performing Arts

American University’s The Department of Performing Arts presented Jane Martin’s Talking With, an evening of powerful monologues, performances, and songs by an extremely talented cast of AU students. Filled with heartbroken, angry-at-times stories of hurt and love gone wrong – the monologues were also filled with hope and self-discovery, learning from past relationships, and choices they wish they could have taken back. 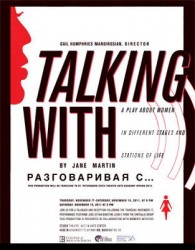 As a man sitting in the audience – it was chilling and sometimes scary, and also wonderful to watch these great young actresses and singers grab the audience from the get-go with the singing of the Helen Reddy hit “I Am Woman” to the closing emotional Celine Dion’s “Only One Road.”

And in between there were some ‘off-the-wall’ characters. Here were my favorites:

Elizabeth Bartolotta began the monologues with a heart-wrenching recounting of her characters and the character’s father dealing with he/his mother/wife dying from cancer – and how clear marbles helped her Mom not to ‘lose her marbles’ while suffering and waiting to die. Instead of overdoing it – Elizabeth’s subtle delivery made the piece more effective, and by doing so – when we heard a marble drop and hit the stage floor – it rang out with an emotional thud. My mother suffered from Alzheimer’s Disease for almost 3 years at The Hebrew Home near where I live in N Bethesda, MD. Memories of watching her slowly disintegrate and lose her ability to remember and function – all came back while Elizabeth performed “Marbles.” I cried for both mothers.

A baton twirler faces adversity after being severely injured and then suffering the humiliation of being spat upon and dropping her baton for the first time in front of ‘half of North Carolina.’ The monologue was performed with great energy and humor and strength by the excited and pissed and funny Emily Goodel. At the end, what will happen to the twirler is still ‘up in the air,’ but she is resilient and courageous, and hopeful. Emily’s performance in Baton Twirler was a tour de force!

Sarah King was hysterical in her ode to ‘The Yellow Arches’ in French Fries, as she wheeled her cart full of Pommes frites paper holders and Big Mac wraps and McDonald’s bags onto and around the stage. Relating a story how a man died eating a Big Mac, the audience ate it up and laughed wildly. “No one dies at McDonalds..They only die at Burger King!” she exclaims with pride. And as she said that and the youngsters in the audience laughed themselves silly – my mind raced to The San Ysidro McDonald’s massacre which occurred on  July 18, 1984, in a McDonalds restaurant in San Ysidros, near San Diego, where 22 people were killed (including the shooter James Huberty), and 19 others were injured. It was a chilling ironic moment for me.

Sarah was the ‘Lord of the Fries’ and her performance had me laughing and then left me frozen with sadness. That’s great acting.

And finally, in Lamps, Shayna Blass illuminated the audience with her need to ‘see the light’ and the need to come out of the dark and face her fears and her life. The lighting design by Ariel J. Benjamin was simply gorgeous and Shayna’s performance elicited sadness and hope.

The cast was directed with much passion and sincerity by AU veteran Gail Humphries Mandirosian and accompanied on piano by Music Director and AU veteran Doug Bowles and percussionist Paul Keesling.

Kudos to the entire cast: Elizabeth Bartolotta, Shayna Blass, Afira Busia, Emily Goodell, Erika Grob, Sarah King, Katie Ryan, Rachel Leah Silvert, Madeline Steiner, Megan Westman, Elizabeth Salamon, and Samuel Edgerly, and David Landstrom. Your performances moved me and the appreciative audience – and I see a very bright future for all of you in the theatre.

Jon Jory. Is he Jane Martin? Photo by Mary Levin.

Talking With played its final performance on Saturday, November 19, 2011, and is now closed. Here is the remaining AU 2011-2012 theatre season.