The Arabian Nights At The United States Naval Academy’s Masqueraders

The United States Naval Academy Masqueraders’ production of Arabian Nights was a night of mesmerizing tales and astounding wonders. Stories told within stories about stories of stories, the show was a vast wealth of funny and engaging tales of life in the distant past of the middle east. A king, (James Frevola) is so scorned by love – marries a new bride every night and kills her shortly thereafter. Unfortunately, he has run out of women to marry, until his royal wazir (Dan Ulerio) presents him with his eldest daughter, Scheherezade (Kiley Provenzano) as a new bride. Her fate of death is halted only by her younger sister’s pleas for stories of great adventure, humbling lessons, and merriment all around. These are the stories you see – each told in turn by various characters, often playing storytellers of other stories inside these tales. 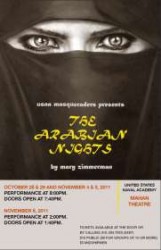 Directed by Christy Stanlake, the Masqueraders took on a challenge of keeping their stories straight whilst weaving entertaining tales suited for the masses. There were layers upon layers of stories unfolding within each other – characters stepping out of one story being told about them and then into a story that they were telling. Stanlake provided accurate direction to ensure that these confusing lines of blending stories remained clear and that character shifts never missed. Her team of players jumped easily from one tale to the next, sometimes without major costume shifts to help indicate character changes, but they did so seamlessly – creating a distinct feel for each of their roles. 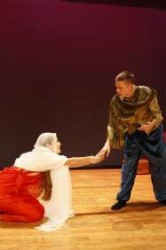 1/C Judy Valderrabano (Jester’s Wife) and 1/C Mark Pfender (Jester) in Act One. The Jester is departing and leaving his wife at home  in ‘The Arabian Nights.’

With a whimsical set and costumes designed by the talented Richard Montgomery, the production easily whisked you away to another time and place. With a lavish set layered with decadent colors you slipped into the fancy palace of a middle-eastern king. Rustic oranges, bright blues, vibrant violets, and various shades of greens, reds, and browns blended together a harmonious concoction of color, creating a vivid atmosphere for the actors to work with. Montgomery created a lively space; filled with sparkling gold stars, gauzy veiled canopies and tall desert palm trees. The actors easily became one with the set as they unrolled the numerous fancy Persian-style rugs to cover the stage floor in the opening scene and they make excellent use of the many pillows tossed around the stage. This magical wonderland was enhanced by the exotic costumes with which Montgomery outfits the players. They were loose and flowing; baggy pants, long robes, saris and veils; and all in a bright array of colors. When indicating royalty Montgomery added sequins and glitter that sparkled brilliantly in the light, and poverty was mirrored in the more subdued tones and simples colors; a true visual feast to set your eyes upon.

The actors, if a bit over-the-top at times, told wonderful stories, fully embodying their characters as they move about the stage. There was a wild and exciting feeling as the players entered the stage for the first time; coming through the house, banging drums, singing and dancing like exotic gypsies. And then the stories began. The main storyteller, Scheherezade (Kiley Provenzano) provided vast entertainment for the audience. Provenzano spoke with wistful nostalgia in her voice as she told the tales; longing to be part of the stories as they unfold. Her limber body leaned forward as if tumbling into the story she was telling and her voice was nearly a song, as if the story was her own personal experience to tell.

The dancing girls (Gabriela Baez, Heather Foxton, Jamie Moroney, and Jenn Underhill) appeared on stage moving as one fluid body; floating like a vaporous mist wafting gently across the stage. Led by ‘Perfect Love’ (Judy Valderrabano) the dancing harem shimmied and shaked to introduce one of the many tales. Valderrabano played her two-faced character with heightened energy, one moment a simplistic shy girl with demure gestures and a sweet sing-song voice, and the next a vicious viper scorned by unrequited love with a physicality akin to a panther on the prowl. Her eyes were expressive; first innocent and longing, and then filled with fierce anger and biting vengeance. Valderrabano, seen later as the jester’s wife, expressed perfect surprise every time one of her lovers arrived at the door. And her lovers played out a fantastic scene in this tale. The pastrycook (Michael Donovan), the Greengrocer (Nik Lutton), the butcher (Jamie Moroney), and the clarinetist (Dan Ulerio) each played a scene loaded with sexual innuendo as they attempted to seduce Valderrabano as one of many lovers. Donovan oozed sexuality in his voice as he slinked around the jester’s wife, picking her up and spinning her around. Lutton makes good use of his props, thrusting a cucumber from his pants in her general direction. Moroney, as the only female lover, exuded a wily sexy smile as she spanked her lover, and Ulerio used well-placed comic timing both physically and vocally to deliver his sexually loaded puns. The culminating moment of this scene happened when the four lovers found themselves stuffed in the privy. While there was no actual privy on stage, they made good use of the space provided, stacking atop one another and easily creating the illusion of a tiny cramped enclosed space. 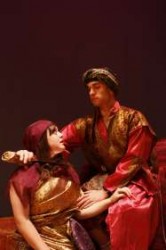 The shining moment came during the story of ‘The Wonderful Bag.’ Two men (Mark Pfender and Michael Donovan) presented mounting arguments to the ownership of the bag discovered unattended in the marketplace. This scene was brilliantly hilarious as it was improvised by Pfender and Donovan. Their wild tales of what was in the bag grew exponentially as each attempted to out-do the other until Pfender claims that the entire Naval Academy (spoken in ancient Arabic code of course) was contained inside the bag. It was a gut-bursting comical scene in the midst of all the moral tales being told. Magnificent performances were provided by the men (Michael McPherson, Moises Diaz, Devin Dugard, Jonathan Lucas, and Wes Cox.) often given just one or two lines – but  delivered with passion and great physicality throughout the cacophony of tales.

The Arabian Nights was a true gem of a production with everything needed for splendid storytelling.

The Arabian Nights, presented by the United States Naval Academy’s Masqueraders, has closed.